While Dhawan and Yuvraj are matching the choreographers step for step, Nehra, in the background, can be seen struggling to catch up with the dance. Watch the video here:

Defending champions Sunrisers Hyderabad (SRH) had a dream start to Indian Premier League (IPL) season 10, as they beat Royal Challengers Bangalore (RCB) by 35 runs in the tournament opener on April 5. Playing in their own den, SRH came up with a clinical performance, with their batsmen putting up over 200 runs on the board and then their bowlers stopping RCB without much difficulty. The solid win called for solid celebration, and the SRH boys did exactly the same. Post victory, SRH opener Shikhar Dhawan shared a video from his official Instagram video, where he can be seen shaking a leg with teammates Yuvraj Singh and Ashish Nehra.

In the video, all three are seen sharing a light-hearted moment and learning ome dance steps from a couple of choreographers. The video was captured when the three were rehearsing for the advertisement campaign for brand Jio . While Dhawan and Yuvraj are matching the choreographers step for step, Nehra, in the background, can be seen struggling to catch up with the dance. Watch the video here:

The video makes for a fun view. The players deserved to celebrate the win too, as all three of them did well in the game. While Dhawan (40) stitched a 74-run second-wicket partnership with Moises Henriques and later shared a 58-run stand with Yuvraj (62) to guide the hosts to 200-plus total, Nehra, just like during the dance session, was a bit off clour as he went for 42 runs from his 4 overs. However, he did pick 2 wickets. Sunrisers will next host Suresh Raina-led side Gujarat Lions on April 9 on a double-header day. 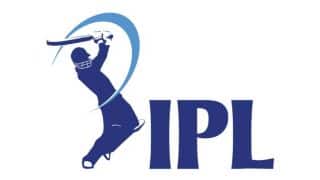