Despite having Virat Kohli, AB de Villiers and Shane Watson in their side, Royal Challengers Bangalore (RCB) suffered a 27-run defeat against Rising Pune Supergiant (RPS) in the ongoing Indian Premier League (IPL) 2017. RCB were halted at 134 for 9 in their bid to chase down a total of 162, as the Man-of-the-Match Ben Stokes took 3 wickets for just 18 runs in his 4 overs. Apart from Stokes, Shardul Thakur too finished with impressive bowling figures of 3 for 35. Although the bowlers had a key crucial role to play, Stokes felt MS Dhoni’s presence made the difference and handed them maiden victory over RCB. LIVE CRICKET SCORECARD: Royal Challengers Bangalore vs Rising Pune Supergiant Match 17

Talking at the post-match presentation, Stokes said, We went into our bowling innings with an understanding of what to do. Everyone executed their plans well. When asked about RPS bowling effort in the death overs which enabled them to get the second win in IPL 2017 out of 5 games, the right-arm medium bowler said, We stayed away from full deliveries, tried to take the pace off and tried to keep it on a good length. I thought we were struggling a bit.The thought was that if we bowl well and executed our plans, we might have a chance.

Stokes also mentioned how he planned Kohli s wicket, To be honest, I had a second guess that I m going to try and bowl him to the end of the mark and T20 is a tough game. On one of the days he could ve just flown that delivery out for a six, but luck was on our side today and we managed to get the hunt.

RPS have not had a good tournament so far. Having played five games till now, they have managed to win only two games with the first win coming against Mumbai Indians (MI) by 7 wickets in the Maharashtra Derby which was their first game this season. Hopefully this is the starting point for us to get a winning streak going. We’ve got some quality bowlers.

Stokes was happy with the energetic crowd attendance at the M Chinnaswamy Stadium, Bengaluru, which is the home ground for RCB. Stokes could not stop heaping praise on MS Dhoni and rated de Villiers stumping as one of the best by Dhoni, He s got amazing hands. If your foot is out of the crease even by a millimetre, you re gone. Wherever we go, with Dhoni in our team, it feels like a home game. It’s a special place to come and play, the atmosphere is always really loud, he said.

He also backed the youngsters Shardul Thakur and Jaydev Unadkat, We ve got so much talent coming in through here. It is great to see them putting in all the hard work in the nets and now come out and perform when given an opportunity. Tonight they got tested throughout with different types of situations and bowled pretty well in those circumstances.

With this win RPS are now at No. 6 position in the IPL 2017 points table whereas RCB, having suffered their successive fourth defeat from five games, are tottering at the bottom of the table. RPS will play their next game against defending champions Sunrisers Hyderabad (SRH) on April 22 at the Maharashtra Cricket Association Stadium, Pune while RCB will play their next game against Kolkata Knight Riders (KKR) on April 23 at Eden Gardens, Kolkata. 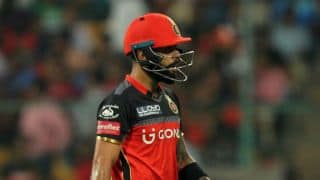