Ishant Sharma stated that the track at Eden Gardens is different and they hardly get to play on such wickets in India, after his side's loss to Kolkata Knight Riders.

In match 11 of Indian Premier League (IPL) 2017, Kings XI Punjab (KXIP) lost their first game of the season against Kolkata Knight Riders (KKR) at Eden Gardens. Defending 172, KXIP s bowlers sprayed the ball in all corners to handover an easy win to the hosts. Ishant Sharma blamed the runs leaked in the powerplay overs for his side’s loss and termed dew as a major factor in this format. Playing his first game for KXIP, Ishant bowled two overs but could not initiate a breakthrough. KXIP will next face Delhi Daredevils (DD) in their own den on Saturday. Full Cricket Scorecard: Kolkata Knight Riders vs Kings XI Punjab, Match 11 at Eden Gardens

Talking about the wicket, Ishant said, When we were batting, the ball was sticking if you hit the length, but now as the dew comes, the ball was coming nicely to the bat. KKR had got off to a flying start by posting 76 runs in the first 6 overs. This very much set the tone for an easy victory. Ishant blamed lack of disciplined start from the bowlers in the chase and stated, In six overs, if you give 80 runs, I don t think you can win even if you score 200.

In the inaugural edition of the cash-rich league, the Indian speedster was seen donning KKR s jersey. Talking about the change in Eden Gardens track over the years, he told, My first 3 years, it was slow, but now there is bit of carry in the wicket. You hardly get such wickets in India.

In the ongoing edition, majority of the games have ended in favour of sides batting second. Dew has been a major factor prompting captains to bat second. Talking about the conditions and bowlers thinking, Ishant added, In this format, you need to have variations. Mohit (Sharma) was trying to bowl slow bouncers, but it was coming on nicely. It s not stopping from the wicket. Dew has a big role in this format.

Ishant concluded by saying that Glenn Maxwell had made KXIP s camp aware of Sunil Narine opening the KKR innings, when they expected Robin Uthappa to walk out with Gautam Gambhir. He said, We were quite surprised. Maxi (Glenn Maxwell) told us. Even in CPL and BBL, he opened for few teams. We were expecting Robin Uthappa. 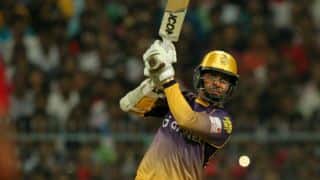 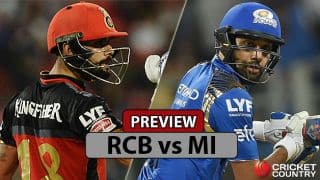