Yusuf Pathan's best innings in IPL 2017 has come against Delhi Daredevils (DD) against whom he scored a free-flowing 59 off 39.

All-rounder Yusuf Pathan has been an excellent player in the Indian Premier League (IPL) both for Kolkata Knight Riders (KKR) and also for his previous franchise Rajasthan Royals (RR). However, it has been over five years since he last played for India. Pathan is still hopeful of staging a comeback to the Indian side, referring to himself as a special talent. The cricketer from Baroda has scored 86 runs in this edition of the IPL so far from three innings, but his best came against Delhi Daredevils (DD) against whom he scored a free-flowing 59 off 39. Pathan also praised the likes of Simon Katich and Jacques Kallis for the team s progress. FULL CRICKET SCORECARD: Delhi Daredevils (DD) vs Kolkata Knight Riders (KKR), IPL 2017, Match 18

Talking about his India comeback, Pathan said, “It does not matter to me who’s ahead of me [in representing India]. I think no one can compete with me. I consider myself as a special talent,” Pathan told PTI in an interview on Wednesday. “I have to back my talent. It does not take time for things to change. If I continue to perform well, at some point I will get an opportunity if not today then tomorrow,” Pathan seemed positive that he may once again don the India blues.

“I don’t want to look at others. My job is to play good cricket and the start has been good this time. I should be satisfied with my cricket and be prepared whenever I get a chance,” he added.

Pathan also said that he will not back away from playing his natural game, regardless of the situation. “There was a lot of pressure [against DD] I just wanted to play my natural game. You will always get out at some point, be it in the first ball or in the 40th ball. But it’s about playing my shots and making the balls count,” he said about his knock. READ: IPL 2017: Yusuf says he enjoys fighting back against an aggressive bowler

Pathan is thankful to Shah Rukh Khan and the entire team management for backing him through the years. KKR persisted with Pathan despite him scoring just 194 runs in 17 matches in KKR s title-winning campaign. “The only message from Shah Rukh Khan is continue to entertain the way you have been,” Pathan said.

Pathan credits KKR coaches Jacques Kallis and Simon Katich for bringing in balance to the team. “The credit goes to Katich and Kallis. They have put on a lot of hard work. They have put a clear picture on every player’s mind. Everyone knows their role well. If you play well result will come your way.”

Pathan also believes that KKR can win a match from any situation as long as he was at the crease and thanked KKR fans for turning up to each and every game in huge numbers. “I think as long as I am at the crease, the team will win comfortably. In the past, I have seen the team has gone on to lose the match after I got out. All these things, I have brought some changes in my game. It’s about playing shots.” READ: Yusuf Pathan hopeful of returning to Indian squad through IPL

“It was heartening to see packed crowd from the very first match. In previous seasons, there would be many empty seats in the initial phase but now it’s all packed up. Such an excitement among the crowd is really motivating to do even better,” he signed off. 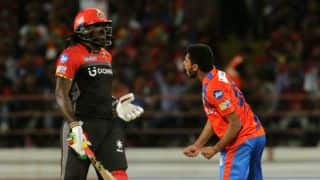