AB de Villiers demonstrated why he is one of the most feared batsmen in world cricket. He slammed an unbeaten 90 against Delhi Daredevils (DD) to muscle Royal Challengers Bangalore (RCB) to their second win in Indian Premier League (IPL) 2018. The crowd at M Chinnaswamy Stadium, Bengaluru was treated to fine batsmanship, first by Rishabh Pant, then by de Villiers.

A target of 176 was never going to be enough on a ground renowned for high scores. Manan Vohra and Quinton de Kock came out to open for RCB for the first time. Vohra got just 2, top-edging a sweep off Glenn Maxwell as Jason Roy took an excellent diving catch at deep square leg.

Virat Kohli added 20 with de Kock before a mix-up between Kohli and de Kock cost the latter his wicket. De Kock made a tentative run from the non-striker’s end but stopped midway, and ended up sacrificing his wicket for Kohli. De Kock made 18 off 16. Kohli was dropped off the earlier ball, off Shahbaz Nadeem.

De Villiers joined Kohli. After setting into his groove, ABD hammered Nadeem for 3 fours in a row to shift the momentum to RCB’s favour. Kohli soon joined the festivities. The pair added 50 in 30 balls including a 106m six by ABD.

Just when it seemed like they were running away with the match, Trent Boult pulled off a stunner at deep square-leg off a poor Harshal Patel full toss. Kohli fell for 30. Corey Anderson arrived with RCB still needing 83.

De Villiers raced to his fifty in 24 balls off a six over mid-wicket. He continued to launch the ball into the first, second and third tiers of Chinnaswamy. Meanwhile, Anderson continued to take singles without any fuss.

There should have been a run out, but the fielders messed things up. Then Anderson was castled by fellow countryman Boult for a 13-ball 15. Mandeep Singh came out and started his innings with a six over the wicketkeeper’s head. Mandeep (17*) did spoil the party for ABD (90*), but the pair ended up taking RCB to a 6-wicket win.

Earlier in the match, Delhi made 174 for 5 thanks to fifties from Shreyas Iyer and Rishabh Pant. Pant in particular stroked elegant and brutal boundaries during his knock of 85. Yuzvendra Chahal starred with ball with 2 for 23. 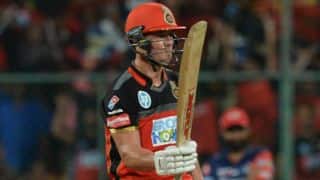