AB de Villiers smashed 69 off 39 and added 107 runs for the fourth wicket partnership with Moeen Ali (65).

The Match 50 of VIVO IPL 2018 was a high scoring game between Royal Challengers Bangalore (RCB) and Sunrisers Hyderabad (SRH). RCB posted a mammoth total of 218 after being put to bat. AB de Villiers smashed 69 off 39 and added 107 runs for the fourth wicket partnership with Moeen Ali (65). It is nothing new that the Bangalore crowd loves de Villiers every time he takes the field.

In the post-match presentation he admitted the chanting to be an amazing feeling and revealed how he plans his innings.

“It’s an amazing feeling when they chant my name. I look to put pressure on the bowlers. I’m human after all. If I get one or two away, I have momentum going my way.”

In the second innings, de Villiers took an amazing catch near the boundary rope to dismiss Alex Hales. Talking on the catch he admitted that he misjudged it in the start. With the win RCB have kept their playoff dreams alive with 12 points to their name.

“With the catch, I made it look tougher than it was. It curved away late, luckily it stuck. I got into a bad position. It’d be great to make the knockouts. Lot’s got to happen. We have to win the next game, then it comes down to run rates.” 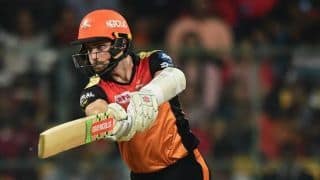 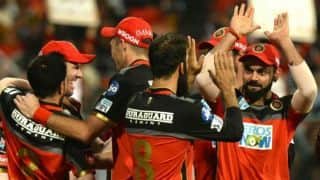