IPL 2018 Auction Live Streaming: When and Where to watch it on TV and online

IPL 2018 Auction Live Streaming: When and Where to watch it on TV and online

The most-awaited Indian Premier League (IPL) 2018 auction is all set to happen at the Ritz-Carlton Hotel, Bangalore. The Ritz-Carlton Hotel has earlier also hosted IPL auctions. The auction will be a two-day affair held on January 27 and January 28. A total of 578 players will go under the hammer, amongst which 16 have been enlisted as marquee players. The 8 franchises have already retained 18 players, meaning only 182 places are left empty.

Chennai Super Kings (CSK) and Rajasthan Royals (RR), who have made a comeback in the IPL after two years will be major attraction. Kings XI Punjab who have only retained one player will also be a team to look on to. Three out of eight sides will be searching for a captain.

The other interesting thing to look for is the involvement of big players in the auction like Chris Gayle, Gautam Gambhir, Ravichandran Ashwin, Ben Stokes, Chris Lynn and many more. With India U-19 qualifying for the semi-finals, the U-19 players will also be in demand. 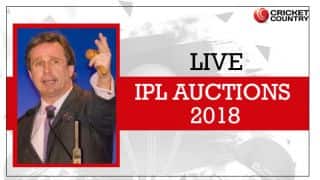