Shivam Mavi, KKR's new pace battery for the ongoing 11th edition of the Indian Premier League (IPL), caught everyone's attention during the ICC U-19 World Cup earlier this year where he bowled at a jarring pace.

Talking about Mavi s technique and confidence on the field, Brett Lee said, I think Mavi has got everything. His actions are beautiful and he packs himself as a fully furnished bowler. With youngsters like Mavi, it s extremely important to play with confidence, enjoying the spirit of the game. He knows what he s doing and it looks like he really enjoys his cricket. I think Mavi for me is the future for Indian bowlers.

Shivam Mavi, KKR’s new pace battery for the ongoing 11th edition of the Indian Premier League (IPL), caught everyone’s attention during the ICC U-19 World Cup earlier this year where he bowled at a jarring pace.

The young pacer clocked more than 140 kph regularly and soon became the spectacle of the tournament owing to his bowling abilities.

Revered and recognised for his lethal bouncer and a constant drive to improve himself and become faster, Mavi is certainly one of the most notable young upcoming fast bowlers in the country.

Following his spectacular performance in the ICC U-19 World Cup, KKR picked him up in the IPL Players auction in February.

The winning pacer grabbed the eyeballs of cricket fans when he dismissed former Delhi Daredevils skipper Gautam Gambhir, during his ‘homecoming’ match against Kolkata Knight Riders. Gambhir was dismissed by Mavi in seven balls during the pacers second IPL outing.

KKR are currently standing at the third spot in the IPL standings, with five wins from nine games they have played so far in the tournament.

The Dinesh Karthik-led side will now lock horns with Mumbai Indians at the Wankhede Stadium on May 6. 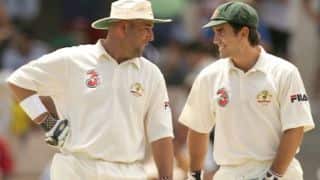