Chris Lynn had injured his right shoulder during the Trans-Tasman T20 Tri-Series final against New Zealand.

Chris Lynn decimated the bowling attack in 2017 IPL season and went on to become the most feared opening batsman in the tournament. It was one of his best IPL season until shoulder injury got the better of him. Of just 7 matches, he scored 295 runs at 49.16 and strike rate of 180.98. That injury kept him away from international as well as domestic tournaments for 6 months. He made a comeback through Big Bash League (BBL) and piled on 148 runs from 5 matches at 37 and strike rate of 162.63.

However, another shoulder injury marred Lynn s participation in T20 leagues. Lynn injured his right shoulder during the final of Trans-Tasman T20 Tri-Series and was ruled out of PSL 2018. There were doubts of Lynn making a return for the early matches of IPL 2018 as well. Brushing aside those rumours, Lynn is confident of making comeback for the opening match of Kolkata Knight Riders (KKR). KKR went all the way and spent INR 9.6 crores using the Right To Match card to draft him back into the side.

In a chat with cricket.com.au, Lynn spoke about his recovery and his 2018 IPL availability.

On his recovery: It’s tracking really nicely. It’s a short turnaround with the timeframe that we’ve got but it’s all going well. The docs and the physios are happy so that’s all I can do.

On playing IPL: The docs and the physios are happy so that’s all I can do. Fingers crossed I can keep going in the right direction and try to make myself available for the first game of the IPL.If not, it’s not the end of the world but I’m doing everything I can to get back out there. I’ve had a bat during the week just on throwdowns, so I’ll ramp it up next week against ‘Cuttsy’ and Billy Stanlake. If I can get through those two blokes, I’ll know I’m going okay.

The doctors and physios have instructed Lynn to avoid diving on the field during the matches. 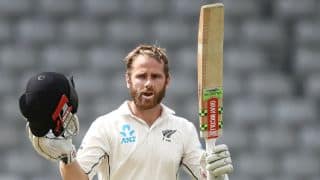