Chris Woakes has been a regular member of England's Test and One Day International squad since the past few months.

Chris Woakes has been a regular member of England‘s Test and One Day International squad since the past few months. He has been a valuable asset in the team contributing with both bat and ball. England however did not have a good touring season in Australia and New Zealand in the longest format of the game.

“The English winter was tough,” admitted Woakes to a group of reporters. “Obviously we played a lot of Test cricket away in Australia and New Zealand, which was hard work.”

Woakes was bagged by the Royal Challengers Bangalore in Vivo IPL 2018 auction for INR 7.4 crores. He has picked eight wickets in four matches and is second in the purple cap list only behind Mayank Markande. On the same lines he was noted talking about the nature of the game.

“I had a really good winter with the white ball and coming here I felt in good rhythm. It s been nice to pick up wickets, and would have been nice to go for a few less runs. But you know that s the nature of the game, you are going to go for the odd boundary, particularly when you re bowling in the Powerplay and death overs.”

“It s something which I m continuing to work on, trying to improve my game. But yes, variations are key, particularly in these conditions with small grounds, good batsmen, good surfaces. You need to try and be able to deceive the batsmen.”

This IPL features 12 English players playing for various franchise. Talking on that Woakes believes this is due to the the performance of England team in the past few months. He was also seen talking about his teammates in other franchise and how he enjoys the competition.

“It s brilliant that the ECB (England and Wales Cricket Board) have allowed us to come and play and it s great that franchises are picking England players. I think it shows where our white-ball game has come in the last couple of years that guys are getting picked up for large amounts in the auctions, which is great for the game.”

“You don t want to be hurt by a teammate on the field,” he said. “As a bowler, you don t want them to be smashing you around the park and hitting you into the stands.

“It gives you that extra incentive to do well, try and get them out or, if you are a batsman, to try and smash them everywhere. It s always a good little battle when you come up against your teammates from England.” 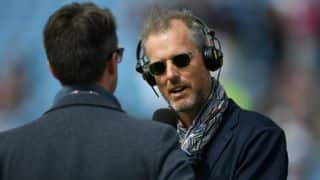