Virat Kohli played a lone battle with his knock of 62-ball 92.

Royal Challengers Bangalore (RCB) were off to a splendid start striking twice within the first spell. Umesh Yadav removed the opener Suryakumar Yadav and Ishan Kishan for golden duck. Thereafter, RCB lost the plot. Evin Lewis’ maiden fifty coupled with Rohit Sharma‘s 94 added to the already erratic RCB bowling. As has been RCB’s bowlers performance this season, they started off well but went haywire in the death overs. Umesh, in particular, faced the wrath from the Rohit, Hardik Pandya and Lewis in the final overs.

Even spinners could not gain much luck. From 0 for 2, Mumbai Indians (MI) went on to post 213 in Match 14 of VIVO IPL 2018. RCB coach, Daniel Vettori, lamented RCB’s bowling in death overs in the post-match press conference: “We are getting good starts. Two wickets in two balls and the last Power Play against Rajasthan wasn t so bad. But our finishing, the ability to close out innings has been poor. That s purely an execution. I think the planning and the strategy it s all there. We just have to execute better,” as quoted on The Hindustan Times.

He lauded Virat Kohli’s 92* but felt the bowlers could have restricted MI to 190: “Virat (Kohli) played exceptionally well unfortunately none could go on with him. We knew how the wicket was and we knew players will be super aggressive. We believed anything under 190 was a good result even after that start. But we let it go.”

RCB’s batting has been heavily relying on Quinton de Kock, Kohli and AB de Villiers. It was de Villiers fifty that helped RCB earn their first win in 2018 IPL. De Villiers was expected to put up a grand show with Kohli at Wankhede. However, the South African was gone for 1. Mandeep Singh as well could not bail out RCB: “We have faith in our batting. With what Mandeep Singh and Washington did in the last game.”

“We have got a long batting order and we obviously know that there is little bit amount of pressure on AB and Virat, but we have got the team to go with them or take over when they get out. We know AB is an incredible player and we hope he does well in every game. But that s not realistic,” Vettori signed off. 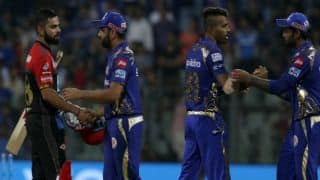