The franchise is expected to announce the new captain shortly.

Following the footsteps of Steven Smith, David Warner has stepped down as the captain of Sunrisers Hyderabad (SRH). This step has come in the wake of the ball-tampering scandal that has left the cricketing world in a state of shock. Warner will not be taking charge of the SRH when the IPL begins on April 7. The franchise is expected to announce the new captain shortly.

The statement from SRH CEO, K.Shanmugam read: “In light of recent events, David Warner has stepped down as captain of Sunrisers Hyderabad. The new captain of the team will be announced shortly.”

Warner had led Sunrisers Hyderabad to their maiden IPL title in 2016. Under his captaincy, SRH have surged upwards with a win and loss ratio of 26:19 from 45 matches. Warner holds a win percentage of 57.77. The players in contention for captaincy are the marquee players Shikhar Dhawan, who has led SRH earlier but does not boast of a great record with win, loss ratio of 7:9 and Kane Williamson, who is yet to lead a side in IPL.

SRH also have Shakib Al Hasan under their belt, who recently became Bangladesh’s T20I captain. But with his recent shameful act against Sri Lanka in the Nidahas Trophy, SRH would be wary of tarnishing their image further.

Smith, Australia vice-captain Warner and batsman Cameron Bancroft have all been sent home after cheating was exposed in the third Test with Cricket Australia set to announce punishments for the trio later on Wednesday In South Africa. 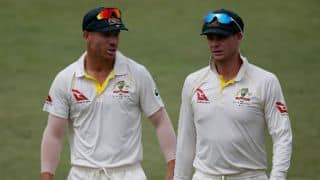