CSK have made it ha habit this season to take every game to the last over and it seems to be working for them.

Chennai Super Kings (CSK) top the points table winning four out of their five matches in the Vivo IPL 2018. In the match 20 against Sunrises Hyderabad (SRH) as well they won by mere four runs in the last over. CSK have made it a habit this season to take every game to the last over and it seems to be working for them. The one game they lost was also dragged down to the last over when MS Dhoni almost took CSK home against Kings XI Punjab (KXIP).

Deepak Chahar bowled a impressive spell of 4-1-15-3 to reduce the opposition 22 for 3 under five overs. Chahar praised Dhoni’s captaincy skills claiming him to be the reason behind CSK’s close wins.

We take pride from these close finishes and feel better. Well, the reason why we keep winning such matches is we have MS Dhoni as captain. His advice during the huddles when Kane (Williamson) and Yusuf (Pathan) were batting well was just not to bowl to their strengths; to stick to a good line and length. And, importantly staying cool, he said in the press conference. 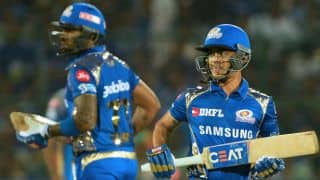