KKR are ahead of RR on net run-rate but Kallis said: "Winning will be the priority."

Kolkata Knight Riders may not have been consistent so far in this year’s IPL but chief coach Jacques Kallis believes it’s a matter of playing two good games which can seal a playoff berth for them.

The Dinesh Karthik-led side lost two back-to-back matches to Mumbai Indians but revived their campaign by posting this season’s highest total of 245/6 in an away match against Kings XI Punjab.

The win means KKR’s fate is hanging in balance with two more rounds left in the round-robin league.

“Destiny is still in our hands. If we play two good games of cricket, we are through to the playoffs and that’s what we are interested in. It’s about taking one game at a time and play well tomorrow,” Kallis told reporters on the eve of their match against Rajasthan Royals at Eden Gardens.

Rajasthan Royals, on the other hand, are on a roll with a hat-trick of wins and with same points (12).

“We are not really worried about what the rest of the teams are doing,” Kallis said acknowledging that it’s a matter of executing their skills on the ground.

KKR are ahead of RR on net run-rate but Kallis said: “Winning will be the priority.”

Jos Buttler has been in imperious form with five half centuries in a row to boost Rajasthan Royals’ campaign and Kallis said they have a plan in place for all opposition batsmen.

“He certainly has been consistent and in good form. So we obviously have to make sure we have some good plans against him and the rest of the batters as well. Hopefully they will work for us to win the game,” he said.

Kallis also lauded the captaincy of Karthik, who has also been consistent with the bat.

“He likes leading from the front, he leads with a lot of energy. He obviously has got lot of experinece and understands the game pretty well. It’s been a fairly smooth transition. Hopefully we can come up with good game plan tomorrow which leads us to victory,” he concluded. 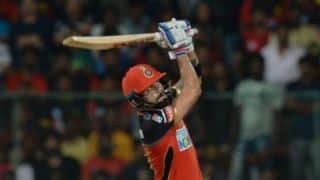