Despite the pacers leaking as many as 109 runs in just 8.5 overs against Chennai Super Kings (CSK) in the previous game, Kolkata Knight Riders (KKR) captain Dinesh Karthik on Friday said it’s not a concern going into their next encounter, at home against in-form Sunrisers Hyderabad. Vinay Kumar was the worst hit among the seamers, going for 35 runs in 1.5 overs as he bowled the first and the last over. Besides Vinay Kumar, Andre Russell (0 for 35) and Tom Curran (2 for 39) were also expensive.

Needing 17 runs in the final over, CSK’s English recruit Sam Billings hunted down the runs with one ball to spare. In the first game against RCB, KKR pacers had conceded 70 runs in 8 overs. “It’s not a concern. One thing that the overs that have gone for big runs are big overs so that’s something we need to look into. It’s early days in the tournament so there’s room for improvement,” Karthik told reporters on the eve of their game against Kane Williamson-led SRH.

There are chances that Vinay Kumar might be dropped from the playing XI after his poor show not only in the last match but also in their opener at the Eden Gardens against Royal Challengers Bangalore. Vinay, in that game, conceded 16 runs in the first over and the same number in the final over.

“Look to be fair to him, I think he bowled some real pressure overs in both the games,” Karthik said of Vinay Kumar. “Those were real pressure overs 1 and 20 in both games. He will be the first one to put his hand up and say he could have bowled a lot better. But having said that, I know he is a strong character and he will come back strong,” the 33-year old Karthik added.

Asked if U-19 World Cup winning pacers Kamlesh Nagarkoti or Shivam Mavi could get a look in, Karthik chose to keep his cards close to his chest. Karthik said the team morale is not down due to the heart-wrenching manner in which they lost against CSK by five wickets in a last-ball thriller. Russell had smashed an unbeaten 36-ball 88 to help KKR reach 203 but Chennai rode Shane Watson’s 19-ball 42 and Billings’ 23-ball 56 to go over the line.

“It’s normal. In this format and this tournament, these are normal. You expect close games as all teams are equal and you expect games to go down the wire. It’s not surprising for us, didn’t come as a shock, they are a very good team. Both played equaly good cricket but CSK just got over the line,” he said.

Karthik was asked if KKR is missing serious pace in the death overs. “Russell is bowling some good pace that’s very good sign for us. Curran bowled well considering it was his first game. Mitchell Johnson is there and (Kamlesh) Nagarkoti. So we have pace in the kitty,” said Karthik who took over the mantle from Gautam Gambhir this year.

KKR’s fielding was also below par in the last game with Robn Uthappa dropping Billings when he was on nine and Curran grassing Suresh Raina, though that did not cost the team much. “There is very little time to change things too much,” quipped Karthik when asked if that is an area they would like to work on.

“We have addressed the issue and this is something all players are aware of. At the end of the day, it’s one skill that all the players can contribute. We are wishing for the best in the forthcoming game,” concluded Karthik. 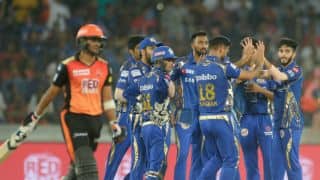 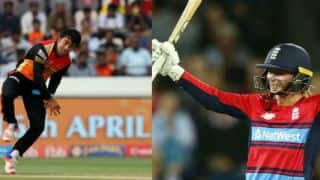