Gautam Gambhir, in his columns for The Times of India, has highlighted important issues on cricket matters outside the playing area. After praising Chennai Super Kings (CSK) and Royal Challengers Bangalore (RCB) for their initiatives for fans, Gambhir went on to talk cricket.

The Gambhir-led Delhi Daredevils (DD) are languishing at the bottom of the VIVO IPL 2018 Points Table. DD will take on Virat Kohli s Royal Challengers Bangalore (RCB) at M Chinnaswamy Stadium on Saturday.

Gambhir says RCB will rely on Kohli and AB de Villiers, and mentions that he won t be missing Chris Gayle, who was let go by the Bangalore franchise ahead of the auctions. Gayle spent 7 seasons with RCB, being their best performer. He remains in scintillating form, this time for Kings XI Punjab. He has blasted a fifty and a hundred already.

RCB will be banking on Virat and AB de Villiers. I was wondering what if they still had Chris Gayle in the ranks. The Universe Boss owned the IPL on Thursday night like only he does. In this kind of mood we are not missing him. May be the RCB team and their coveted 12th man (their fans) is, Gambhir writes in his column.

In his earlier column, he wrote about missing his brief trip to Natural Ice Creams in Mumbai. The joints are famous for their fruit-based ice cream flavours. However, Gambhir is hopeful of enjoying something tasty after DD s match against RCB.

If all goes well, I will be going for Cheeku flavour in a waffle cone, he wrote, referring to RCB skipper Virat Kohli s nickname.

Gambhir and Kohli have an interesting history. The Delhi teammates have been a part of several happy dressing rooms for India and have stitched numerous partnerships over the years. In 2013, the duo were also involved in a heated clash during an IPL match. Despite that they share a cordial relation and are true Dilli-wallahs at heart. 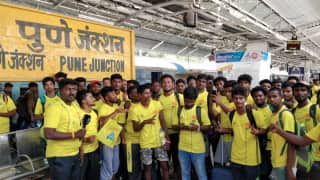