Gambhir joined DD after KKR did not retain him in the January IPL player auctions.

In a sudden call, Gautam Gambhir has decided to step down as Delhi Daredevils (DD) captain in the ongoing Indian Premier League (IPL) season. Shreyas Iyer will be taking over reigns from him. Gambhir has so far lead DD in six games, winning one and losing five. Gambhir in the press conference said: “I take full responsibility for the position we are in. And looking at the position, I have decided to step down as captain. Shreyas Iyer will take over. I still feel we have the team to turn things around this IPL. It was absolutely my decision. The management didn’t pressurise at all. It was the right time to step down.”

His batting has been off the mark as well having scored just 85 runs in 6 games for DD.

Speaking about Gambhir stepping down, head coach Ricky Ponting said : “Being the leader of the team, he (Gambhir) put his hand up and made the tough decision. I completely endorse (Shreyas) Iyer as captain. He has a huge future in the game and for the Daredevils as well. I would also like to congratulate Gautam on the decision.

As tough as it might be, it gives us a fresh start to perform from hereon. We can start fresh and to make an impact, Looking forward to seeing how Shreyas does”. 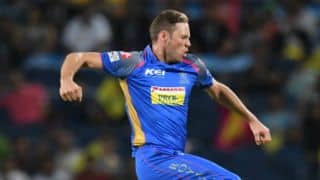