"I am always trying my best to adapt to the situation and conditions. I try to do it my way as best I can" - Kane Williamson.

When David Warner stepped down as the captain of Sunrisers Hyderabad (SRH) following the ball-tampering row, Kane Williamson was endowed with huge responsibility. Being the only overseas captain in VIVO IPL 2018, Williamson has so far amassed 230 runs at an average of 57.50, scoring at an impressive strike-rate of 131.42. Williamson plays with much ease against pace and spin. He has maintained his calm and composure in the most tense situations.

Williamson himself had accepted the fact in an interview: “Everyone is gifted, I guess, but you get some that seem exceptionally so. I’m not one of them.” Which is why the New Zealand and SRH skipper believes he does not try to emulate AB de Villiers or Chris Gayle in anyway.

To his defense, Williamson said: “I am always trying my best to adapt to the situation and conditions, and not try and to hit the ball like Ab (de Villiers) or Chris Gayle. It is never going to happen; I try to do it my way as best I can. It (close games) is a definitely a challenge, we had a close game yesterday. The responsibility of the captain within a side and walk and help mates, rather than trying to get too caught up in the emotion of it all up.”

Williamson being a modest captain hailed Rashid Khan as a top-class bowler and backed the Afghan spinner despite his torrid time in the previous two IPL games: “Rashid is a world class bowler and the T20 cricket doesn t make anyone exempt from that the fact that anyone can be put under pressure and any bowler can be hit. It is the nature of the game. It s a tricky one going into the next few games, some tough ones coming up. He needs to embrace those challenges.” 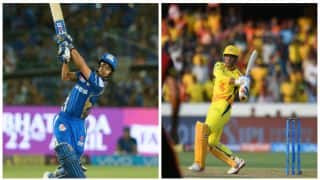