Ishan Kishan blasted the joint second-fastest fifty of VIVO IPL 2018 to propel Mumbai Indians (MI) to 210 for 6 after 20 overs against Kolkata Knight Riders (KKR) at Eden Gardens, Kolkata in Match 41 of the tournament. Ben Cutting and Krunal Pandya provided an apt finish to the innings by slamming Piyush Chawla for 22 in the final over. KKR had the option of going for Tom Curran or Andre Russell but Dinesh Karthik went with the Chawla.

Kishan got to the mark in 17 balls and equalled Sunil Narine s feat, who too brought up the mark in as many balls this season. Kishan s fifty is the joint fourth-fastest fifty in the tournament history, the joint-fastest for MI, joint-fastest against KKR, and joint second-fastest at Eden Gardens. Kieron Pollard had brought up a 17-ball against the same opposition in 2016 at Mumbai.

Kishan smashed Kuldeep Yadav for 4 consecutive sixes. The third one brought up his fifty. The hallmark of his batting were the clean hits off the middle of the bat. He eventually departed for a 21-ball 62, an innings consisting of 5 fours and 6 sixes, before falling to Sunil Narine.

Kolkata helped Mumbai s cause by dropping as many as 3 catches, Kuldeep being the culprit twice. Nitish Rana dropped a sitter at gully to let Rohit go.

Mumbai were off to a solid start courtesy Suryakumar Yadav s form. Evin Lewis, too, joined the party. In the fifth over, Kuldeep dropped a difficult chance of Lewis off Prasidh Krishna. KKR risked by giving Chawla the last over of the Powerplay. After giving away 2 fours to Suryakumar, Chawla dismissed Lewis. Trying to pull Chawla out of the ground, Lewis got an edge to thigh pad and lobbed to Chris Lynn at gully. Mumbai were 47 for 1 after Powerplay.

Chawla struck for the second time in the ninth over, dismissing the in-form Surya. Looking to clear deep mid-wicket, Surya was foxed into playing a sweep, straight to Rinku Singh.

The innings seemed to slow down when Kishan infused life into it. He smacked Kuldeep for a 98-metre six and plundered 14 off the 11th over, bowled by Chawla.

Earlier, KKR won the toss and elected to bowl. While MI went for an unchanged side, KKR made two changes, one of them forced. Rinku came in for an injured Shubman Gill, while Mitchell Johnson made way Curran. 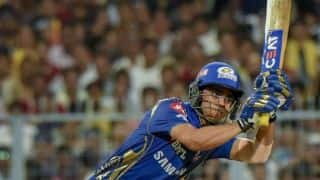 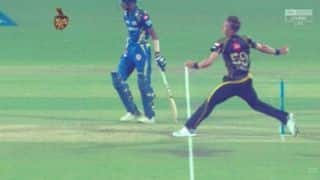