Sandeep Sharma and Basil Thampi were the pace bowling replacements for SRH, whereas Mohammad Nabi came in for all-rounder Deepak Hooda.

Sunrisers Hyderabad (SRH) had just managed 118 on the board in the Match 23 of VIVO IPL 2018 against Mumbai Indians (MI) at the Wankhede Stadium. With injuries ruling out their key bowlers Bhuvneshwar Kumar and Billy Stanlake the chances looked bleak. Mumbai found a way to collapse to their fifth defeat of the season. They had earlier lost a nail-biter against Hyderabad and it was their batting that let them down again. SRH, despite being under strength, skittled out Mumbai for 87. SRH skipper Kane Williamson was upset with his batters but hailed the depth of SRH squad for ensuring the 31-run win.

“Clearly a tough surface. Without a doubt, we were expecting a lot more from our batsmen. Perhaps we could have gotten to 140 mark, but turns out 120 looked good enough on this track,” said Williamson, who was SRH’s best batter and breezed to a 21-ball 29.

Sandeep Sharma and Basil Thampi were the pace bowling replacements for SRH, whereas Mohammad Nabi came in for all-rounder Deepak Hooda. Nabi chipped with a 10-ball 14 and took the important wicket of Ishan Kishan.

Sandeep was at his impressive best, bagging figures of 3-0-9-1. Thampi dismissed MI’s top scorer Suryakumar Yadav and also the last batsman, Mustafizur Rahman. The Kerala pacer, who won the Emerging Player last season, finished with 1.5-0-4-2. Rashid Khan, who took a pounding in the last 2 matches, was the Man of the Match for his figures of 4-1-11-2.

“A fantastic second half for us, but we are still to put a collective performance together. There is depth in our squad which is important and we saw that today. Number of injuries and number of changes, a different balance. We held our heads high and at the same time the best part is how well the guys performed in the second half of the game,” added Williamson, who was appointed the captain after David Warner was banned for the tournament.

SRH occupy the third spot in the IPL points table with 8 points. The table is led by Kings XI Punjab (KXIP) and Chennai Super Kings (CSK), the only two sides SRH lost to. SRH will take on KXIP at Hyderabad on Thursday. 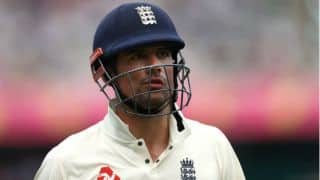