At the 17th over, MS Dhoni handed the ball to his most experienced bowler. Dwayne Bravo answered captains call. A flurry of yorkers, slow cutters and the wicket of danger man Kane Williamson changed the script of VIVO IPL 2018 Match 20. Chennai Super Kings (CSK) and Sunrisers Hyderabad (SRH) started off on a similar note: struggling to get going in the first 10 overs and then accelerating the innings the next 10. However, there was Bravo who stood between the two tales.

After Williamson (84) and Yusuf Pathan (45) were removed in succession, Rashid Khan entered when the equation read 25 off 8. Rashid had a forgettable day in the office again, going for 4-0-49-1. However, he went for a six off his first ball, leaving 18 for CSK to defend in the final over. Bravo went for a yorker, a low full toss in the next three deliveries leaking just 2 runs from them. But a short ball was sent for six and the next delivery was smacked for boundary. SRH needed 6 off 1. After a long chat with Dhoni, Bravo bowled a yorker and the ‘champion’ celebrations begun. With that CSK also regain their top spot in 2018 IPL points table.

How it all went about…

Defending 182, Deepak Chahar was the wrecker-in-chief for CSK in the initial overs. Chahar s quota of 4 overs witnessed 17 dot balls and 3 scalps under his belt: local boy Ricky Bhui and Manish Pandey were edged for 0. Deepak Hooda handed an easy catch to Ravindra Jadeja at extra cover for 1. CSK also put up a masterclass show on the field saving boundaries. One such effort was that of Karn Sharma who leapt in the air to stop Williamson’s six. If it was a catch, Trent Boult would have received a stiff competition.

SRH were tottering at 40/3 at the end of the Powerplay. Unfazed by the fall of wickets, Williamson along with Shakib Al Hasan smacked the shorts balls and slower deliveries all over the park. Amidst the run-fest, Sharma struck again this time with the ball to scalp his 100th T20 wicket of Shakib. That ended the blistering partnership of 49 runs between Williamson and Shakib.

Pathan came along and joined the party with Williamson. CSK were 54 for 2 while SRH were 71 for 3 in 10 overs. Just like CSK, SRH too went berserk. Williamson along with Pathan, who was injured twice, put up a show with back-to-back sixes in the 15th over. Sharma who was brilliant with fielding and also took a crucial wicket of Shakib ended up leaking 22 runs that over.

Williamson picked up pace and was cruising to his century. Back in 2010, Pathan had scored a century against Mumbai Indians (MI), albeit for a losing cause batting second. Williamson looked at his menacing best to change that record.

Dhoni was running out of option as Ravindra Jadeja bowled his full quota of overs as well (for the first time in IPL 2018). Shardul Thakur too could not help CSK s cause. It was champion Bravo who changed CSK s fortunes after he scalped Williamson.

Earlier, SRH s balanced bowling unit were ripped apart by Ambati Rayudu (79), Suresh Raina (54*) and MS Dhoni’s (25*) combined efforts. They took SRH to an unthinkable score of 181 from 32/2. Bhuvneshwar Kumar ended up as pick of the bowlers with his figures of 4-0-22-1.

Man of the Match: Ambati Rayudu 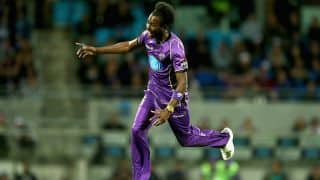