The Ravichandran Ashwin-led KXIP are at the top of the table.

Kings XI Punjab (KXIP) on Saturday beat Kolkata Knight Riders (KKR) by 9 wickets via DLS method at Eden Gardens to reach the top spot in VIVO IPL 2018 Points Table. Mayank Agarwal on Saturday said their batsmen have been doing well in this tournament and the players understand each other well and has gelled as a unit.

We have been batting well. We intend to keep doing the things we’ve been doing, Agarwal told reporters.

Chris Gayle turned on the heat and proved why he is T20 cricket s best batsman. After being benched in the first 2 games, Gayle returned with scores of 63, 104 not out and 62 not out.

India opener KL Rahul, too, has been in scintillating form. He brought up his second fifty of the tournament when he slammed the 27-ball 60 at Eden Gardens, bringing up another Man of the Match performance. In KXIP s opener, Rahul smashed a fifty of just 14 balls against Delhi Daredevils.

Asked about Gayle s form and whether it s more of a one-man show for Punjab, Agarwal denied, Gayle brings in a lot of firepower. Along with him, the bowlers are also stepping in. Rahul is doing well too. So we can’t say it s a one man show.

The team led by Ravichandran Aswhin has done well this season. Agarwal believes that the team understands each other well.

Our performances are speaking for themselves. We gel well as unit and understand each other well, he said.

KXIP have 8 points from 5 games and take on Sunrisers Hyderabad (SRH) at Mohali on April 26. 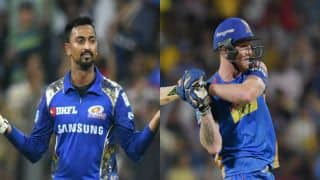 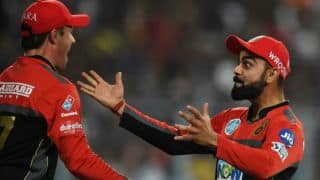