Kings XI Punjab (KXIP) beat Sunrisers Hyderabad (SRH) for the first time at Mohali in IPL. In Match 15 of VIVO IPL 2018, Chris Gayle‘s century took the game away from SRH, handing KXIP a 15-run win. Chris Gayle scored an unbeaten 63-ball 104, the first century of 2018 IPL. It was his sixth IPL and 21st T20 century. Presently, Gayle holds most number of centuries in IPL. Of them, three of these centuries have come for Royal Challengers Bangalore (RCB), who snubbed him in 2018 IPL auctions. His second best performance has come in BPL with total 5 centuries.

Rashid Khan, who is knock for his economical and match-winning spells, was torn apart by Gayle’s knock as he ended up leaking 55 runs. Siddarth Kaul and Bhuvneshwar Kumar ended with wicket apiece, despite Gayle’s carnage. For SRH, Kane Williamson and Manish Pandey came good with fifties after their openers Shikhar Dhawan was injured and Wriddhiman Saha was gone for 6. Shakib Al Hasan’s late blitz also proved to be ineffective.

Here is how KXIP and SRH players have fared after Match 16 of 2018 IPL:

Man of the Match: Chris Gayle. 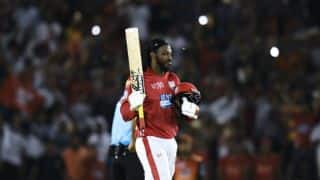