Ashwin not just ended with career-best 7 for 59 after his first innings figures of 6 for 81, he finished with best match figures of 13 for 140 during the the final Test against New Zealand in 2016 in Indore.

Kings XI Punjab (KXIP)‘s run in VIVO IPL 2018 has been excellent with three wins from their four games. They rode on Chris Gayle’s brilliance in their previous games against Chennai Super Kings (CSK) and Sunrisers Hyderabad (SRH). Although KXIP will be playing their next game at Eden Gardens against Kolkata Knight Riders (KKR), Indore getting ready to host Punjab on May 4 against Mumbai Indians (MI).

Come, join him and show your support to the Kings.

Ravichandran Ashwin, especially is set to enter a familiar zone. A venue where he registered his best Test figures. India who have played just one Test in this venue against New Zealand, were welcomed by a packed stadium in 2016. Ashwin produced a masterclass innings as he picked up his sixth 10-wicket match haul to help India humble New Zealand by a massive 321 runs and sweep the three-match Test series at Indore.

Ashwin not just ended with career-best 7 for 59 after his first innings figures of 6 for 81, he finished with best match figures of 13 for 140. All of this happened here.

With too many questions rising on his position in the Test and limited-overs squad, can he make a statement at Indore to make a resounding comeback to the Indian side? 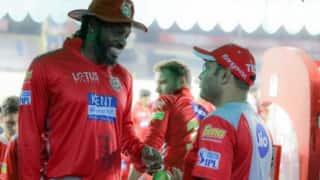