The defeat jeopardises Rajasthan's chances to advance for the Playoffs as another win would not ensure them a spot due to their net run-rate.

Chasing 143 is always tricky. These sort of targets have chasing sides in two minds: should you play safe, or should you go all out? But then when you have Sunil Narine, he knows only one gear and that’s top; Narine’s initial onslaught decided the tone of the chase. Kolkata Knight Riders (KKR) cruised to a 6-wicket win over Rajasthan Royals (RR) in Match 49 of VIVO IPL 2018, at Eden Gardens in Kolkata. Kuldeep Yadav’s 4-wicket haul had ensured RR were restricted to a mediocre total. Then the batters did the rest.

KKR were off to a rollicking start. Narine was severe on Krishnappa Gowtham, inexplicably asked to bowl first over. Narine welcomed him by smacking 21. Ben Stokes hit back, getting Narine and then having Robin Uthappa with a bouncer. Chris Lynn was more subdued in approach and looked to spend time in the wicket.

Nitish Rana was troubled early on by the angle Jofra Archer created around the wicket but looked good during his brief stay. He was eventually done by Ish Sodhi (Ajinkya Rahane reviewed and got the LBW his way). Dinesh Karthik continued with his rich form and added 48 for the fourth wicket with Lynn.

Just when Lynn looked to open his arms, he became the third victim of Stokes but not before he had grinded out an uncharacteristically patient 45. Karthik was joined by Andre Russell and the duo ensured KKR were home without much fuss. Karthik finished the game with a six.

The defeat jeopardised Rajasthan’s chances to advance for the Playoffs. Their net run rate is certainly below par.

It was not all bad for RR at the start. They were 49 for 0 after 3 overs and then 63 for 0 in the fifth when Russell sent back Rahul Tripathi back. However, KKR only pounced back after Kuldeep was introduced into the attack. Rahane miscued a sweep to lose his stumps against Kuldeep’s googly. Then he got Jos Buttler, who had smashed Shivam Mavi for 28 in the third over, and both Stuart Binny and Stokes to finish with 4-0-20-4.

Another 11 runs would have made Buttler the first cricketer to register 6 consecutive fifties in T20 cricket. From 63 for no loss, RR lost 7 wickets for next 44 runs before Jaydev Unadkat took the score to some respectability.

Narine, who played the cameo, also bowled well and got the wicket of Sanju Samson. Mavi leaked runs but bowled a brilliant first over, clocking 149.8 kph in his second ball and averaging 144 kph in the over.

With the England Test squad for Pakistan series announced, RR may miss two of their best players, Stokes and Buttler from their next game, which will add to their miseries.

Man of the Match: Kuldeep Yadav. 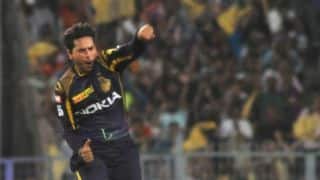