The win was architected by Nitish Rana's all-round show.

Kolkata Knight Riders (KKR) cruised to the top spot of the VIVO IPL 2018 points table with a 7-wicket win against Rajasthan Royals (RR) in Match 15 of the tournament, at Sawai Mansingh Stadium, Jaipur. The win was architected by Nitish Rana’s all-round show. The Player of the Match against Delhi Daredevils (DD) in the previous match, Rana finished with a 27-ball 34* here. He had earlier got the wickets of Ajinkya Rahane and D’Arcy Short to finish with 2-0-11-2. KKR now have 6 points from 5 matches.

Dinesh Karthik dispatched Ben Laughlin over deep midwicket for a six in the 19th over to score the win. Rana and Karthik shared an unbeaten 38-ball 61-run stand for the fourth wicket to complete a comfortable win.

Taking a leaf out of KKR’s book, RR opened the bowling with off-spinner K Gowtham. The decision proved to be an instant hit as Gowtham hit Chris Lynn’s stumps. Robin Uthappa joined Sunil Narine and there began an array of alluring strokeplay. Earlier in the day, Narine had registered his worst IPL bowling figures (4-0-48-0), but he made it count with bat. The duo added 69 off 49 balls to set KKR’s foundation for the chase before Narine was run out.

Uthappa looked set for a fifty but perished at long-off in a bid to bring up the milestone with a six. Looking to dispatch fellow Bangalorean Gowtham out of the ground, he was denied by Ben Stokes’ acrobatics. Not only did Stokes stop the six, he ensured he had not pushed the ball back enough and rushed in from the ropes to complete the catch.

Karthik looked set from ball one when he joined Rana at the crease. The pair dealt with singles early on. Then, when they needed 35 off last 4 overs, DK and Rana slammed a six each off Jaydev Unadkat to plunder 16 off the 17th over. The rest was a cakewalk.

Earlier, KKR followed their trend by electing to bowl and were off to a very good start. Wrist-spinners Piyush Chawla and Kuldeep Yadav started proceedings. RR managed just 9 off their first 3 overs. Narine was brought to bowl the fourth over and Ajinkya Rahane counterattacked, laying rest to the debate if he is the best person to open.

The openers Rahane and D’Arcy Short added 54 in 41 balls. The rest of the innings was completely dominated by KKR spinners, Chawla, Kuldeep and Rana. Rana removed both openers and allowed KKR to dominate. Shivam Mavi picked up the in-form Sanju Samson, while Chawla’s comeback spell saw him get the back of dangerous Stokes. KKR did not allow any partnerships to flourish in the middle. Tom Curran picked up 2 wickets off back-to-back balls in the 19th over of RR innings.

Man of the Match: Nitish Rana 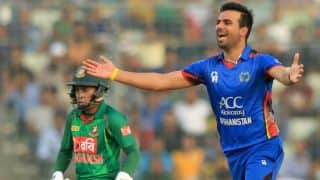 Bangladesh to play T20Is against Afghanistan in proposed series in India 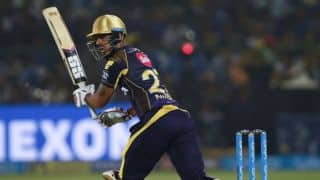 IPL 2018: Want to play for India, says Nitish Rana after winning second consecutive Man of the Match award for KKR