Cruising at 63 for 0 in the fifth over, Rajasthan Royals (RR) were bowled out for 142 by Kolkata Knight Riders (KKR) in the Match 49 of the VIVO IPL 2018, at Eden Gardens, Kolkata.

Cruising at 63 for no loss in the fifth over, Rajasthan Royals (RR) were bowled out for 142 by Kolkata Knight Riders (KKR) in the Match 49 of the VIVO IPL 2018, at Eden Gardens, Kolkata. Chinaman bowler Kuldeep Yadav was the wrecker-in-chief as he picked 4 for 20 in his quota of 4 overs. RR looked set for a total well in excess of 200 but over reliance on Jos Buttler cost them. Buttler blazed away at the start before falling for 39, thus missing out on being the only cricketer to score six consecutive fifties in T20 cricket.

After a terrible middle-order collapse from RR, Jaydev Unadkat played a cameo to give the visitors some respectability with an 18-ball 26. The innings could have folded at 135, had Prasidh Krishna not spilled a simple chance of Unadkat in the 18th over off Andre Russell.

KKR had earlier elected to field. At the toss, RR skipper Ajinkya Rahane had he did not mind batting first. KKR strengthened their pace attack by bringing in Shivam Mavi in place of leg-spinner Piyush Chawla. RR, despite their good show in recent past, made three changes. They brought in Ish Sodhi, Anureet Singh and Rahul Tripathi.

Mavi, making a comeback after an injury, bowled with serious pace in the first over. RR opener Tripathi was dropped off the first ball by Nitish Rana at first slip. Mavi bowled his first over at an average of 144 kph. His second ball was delivered at 149.8 kph.

Tripathi blasted 19 off the second over of the innings, smacking Krishna for a six and 3 fours. Buttler then broke the shackles against Mavi by using the bowler’s pace and smacking him for 28 in his next over. RR had raced to 49 after 3 overs when Sunil Narine was called in for rescue act.

It was Russell who put a break to the carnage by beating Tripathi with pace. The ‘feather edge’ went to Dinesh Karthik’s gloves. Rahane took time to get going as KKR applied brakes on the rapid scoring. RR still got 68 in the Powerplay their fourth-highest score after 6 overs in IPL history.

Kuldeep Yadav’s googly ended Rahane’s struggles in the middle as he miscued a reverse sweep to get cleaned up. It was unnecessary at a stage when Rahane could have just rotated the strike with Buttler in smoking form.

Karthik made use of a good review that fetched Narine the wicket of Sanju Samson. A collapse ensued. Stuart Binny and Ben Stokes were outfoxed by Kuldeep. Mavi came back in his second spell to dismiss Krishnappa Gowtham with a vicious bouncer. 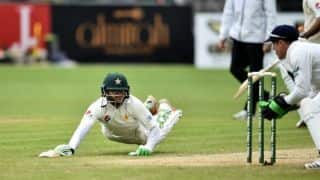 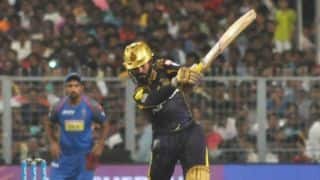