Kings XI Punjab (KXIP) go up against Royal Challengers Bangalore (RCB) in Match 48 of the VIVO Indian Premier League (IPL) 2018. The match will be played at KXIP’s fortress this season, Holkar Stadium in Indore, having won 2 out of 3 home games. KXIP are just ahead of RCB in terms of win; 12 wins out of 21.  This will also be KXIP’s final home game of the season.

To ensure qualification, KXIP need to win all their remaining three games. Tie against RCB will be crucial with Sunrisers Hyderabad and Rajasthan Royals being their final two opponents. RCB managed to beat KXIP by 4 wickets at M.Chinnaswammy Stadium. KXIP are coming off a comprehensive defeat against Kolkata Knight Riders (KKR) that exposed their weakness.

Apart from KL Rahul, no other batsman has been consistent. Chris Gayle’s willow has fallen silent and lack of runs from Karun Nair and Mayank Agarwal is a still a concern heading into the business end of the tournament.

There is still no news on Mujeeb Zadran’s injury, which takes the zing out of their bowling attack. David Miller could get a look in.

RCB, on the other hand, will look to spoil KXIP’s party. They have nothing to lose, a qualification for them will come as a bonus. Virat Kohli and team management will want to fine tune things looking at the next season. Sarfaraz Khan is a concern for them. With a win in their last match, it is unlikely that RCB will make a change.

KXIP will be eager to notch up a win in bid to try for the maximum of 14 points. The pressure will be on KXIP, while RCB will play with more freedom as they will have no burden on their shoulder. A qualification will be an added bonus for RCB to a poor campaign. 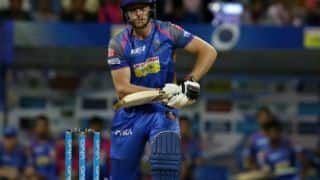