Match 31 of ongoing VIVO IPL 2018 saw a tight finish between Royal Challengers Bangalore (RCB) and Mumbai Indians (MI). With both sides languishing at the bottom, they were desperate for victory. Defending 168, RCB had MI under the pump at 21 for 3, and later reduced them to 84 for 5. MI recovered, but some tight death bowling and excellent fielding from RCB restricted MI to 153 for 7.

MI’s chase started on a wrong note. Tim Southee ensured Ishan Kishan registered back-to-back golden ducks against RCB: Kishan moved out of the crease to negate the swing but the ball nipped in and hit timber.

Suryakumar Yadav followed suit. He shuffled and missed Umesh Yadav’s incoming delivery in an attempt to play towards leg and was trapped LBW.

MI’s woes continued as skipper Rohit Sharma fell for a golden duck. He was hurried onto the ball, with extra bounce, and got a thick edge.

JP Duminy’s calmness was the need of hour. He stuck around for a while but never really looked threatening. Kieron Pollard, at the other end, was deceived by a cross-seamer by Mohammed Siraj. He went for a needless poke, with a slip in place, and perished.

At this stage Yuzvendra Chahal took control with some canny defensive spin bowling. The Pandya brothers, Hardik and Krunal, had a clear plan: to bat deep and consolidate later in the innings. They played out Chahal and were fine with playing out some dry overs as well. They then upped the ante by attacking Colin de Grandhomme.

However, the run-flow was curtailed due to some intelligent death bowling from RCB. Siraj mixed things up and seldom faltered in length. Southee, as expected, made things difficult with subtle change in pace.

Hardik scored a valiant fifty but couldn’t prevent his side’s sixth defeat. His wasn’t a fluent innings (neither was Krunal’s), depicting the sticky nature of the surface.

Earlier, MI had opted to bowl first. RCB somehow managed 167 for 7 through contributions from Brendon McCullum and Virat Kohli and some last-minute hitting from de Grandhomme.

RCB’s hunger for success on the skipper’s wife’s (Anushka Sharma, who was also in attendance) birthday has revamped their campaign. Meanwhile, MI couldn’t maintain the momentum post their impressive win over Chennai Super Kings (CSK). 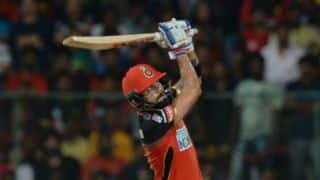