IPL 2018: MI have to continue momentum after win against KXIP, says Rohit Sharma

IPL 2018: MI have to continue momentum after win against KXIP, says Rohit Sharma

In Match 34 of VIVO Indian Premier League (IPL) 2018, Mumbai Indians (MI) piped Kings XI Punjab (KXIP) by 6 wickets. Rohit Sharma-led side chased down 175 runs at Holkar Stadium, Indore with an over to spare. Rohit himself scored 24 and stayed till the end, adding 56 in 3.3 overs with Krunal Pandya (31* in 12 balls) for the fifth wicket. Despite the margin, it was not an easy win. Till the 18th over there was little to separate the sides.

Speaking at the post-match presentation, Rohit that Mumbai cannot afford to lose momentum going ahead: “Playoffs are important but we need to win games to reach there. Big challenge for us to continue this momentum from hereon. In the past we have won games and then gone on to lose a few games. Don’t want that to happen again. Today was a perfect night for us, we did exactly what we spoke of.”

Rohit also lauded his bowlers: “We started well with the ball. To restrict their batting unit on this pitch at this ground was a great effort … We’ve been giving too many at the death but that’s how the game goes. I had to bring Jasprit [Bumrah] in the 19th over with two set batsmen and if he struck, would have made things easier for Hardik [Pandya]. Plus the longer boundaries would have helped Hardik in the 20th over. That’s how it goes sometimes. I have to use Jasprit really well and the others around him are doing the job for us. It’s about being really smart with the ball.”

Mumbai s next game is against Kolkata Knight Riders (KKR) on May 6, at Wankhede Stadium. 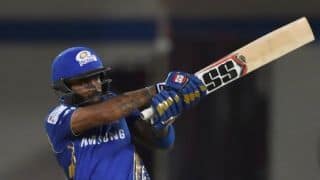 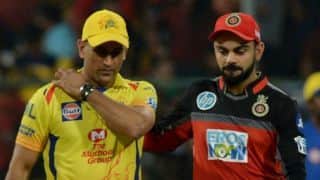