Chennai Super Kings (CSK) registered their third victory in Vivo IPL 2018 defeating Rajasthan Royals (RR) by 64 runs. They now top the points table with six points. Shane Watson recorded his third IPL century and also the highest individual score in this edition. The bowlers kept things tight and did not release the pressure bowling RR out for 140 under 19 overs.

MS Dhoni in the post match presentation talked about the fitness of the players in CSK with most of them being over 30 years.

“Big game for us, we lost the last one. It’s like an unknown territory for us. CSK is used to be slightly behind, before getting into the groove. Have to keep the fitness levels up, most of us are over 30. No point getting injured when you’re trying to stop a single or double.”

The franchise had arranged a train from Chennai to Pune filled with 1,000 fans due to shift of venue. However, the atmosphere was no where close to the one in Chepauk, but he seemed sure of more support in the coming matches.

“Change of venue – to be frank – CSK wasn’t there for couple of years. I played for Pune. The fans supported me. It’s time to return the favour. It’s Chennai Super Kings, not Pune Super Kings. They have the choice whether to support CSK or the other team. By the end of the seventh game, we’ll see a lot more yellow in the crowd.”

Apart from Watson’s century the contribution from Suresh Raina and Dwayne Bravo guided CSK to a huge total. Dhoni believes that the batsmen made things easier for the bowlers. CSK used seven bowlers in total with six of them picking wickets.

“Batsmen did the job, they put on more than what was required on the board. Made the bowlers’ life easy. Spinners had to vary their line and lengths along with the pace. It’s a league stage, it’s not like the quarters or semis, where if you lose you’re out, so there’s not that much pressure.” 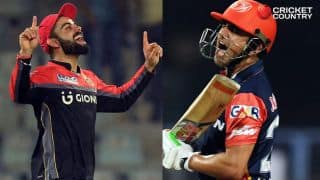