IPL 2018: MS Dhoni gets emotional as he speaks on return of Chennai Super Kings, Watch Video

IPL 2018: MS Dhoni gets emotional as he speaks on return of Chennai Super Kings, Watch Video

MS Dhoni is a master of masking emotions but this time he choked up with misty eyes.

MS Dhoni is a master of masking emotions. However, the former Indian captain choked up with misty eyes as he spoke on the return of Chennai Super Kings (CSK) in the 11th edition of the IPL.

Dhoni had been a part of CSK since the inception in 2008. Over the next eight seasons, he led them to playoffs every time and twice, they emerged as IPL champions (2010 and 2011) and ended runners-up four times (2008, 2012, 2013 and 2015). CSK can be arguably called the most successful IPL team. The franchise, however, was banned from participating in the league in the previous two editions and its reputation was marred in spot-fixing controversy.

CSK is known to retain its core players and with the team suspended, the players played for different franchises. Dhoni appeared for Rising Pune Supergiant (RPS) in the previous two editions.

Nevertheless, the CSK fans remained loyal and the yellow brigade awaited IPL 2018. Their team is back with Dhoni, their thala at helm and with it returns the core too.

Dhoni could not help display emotions recalling the return while addressing the audience at an event in Chennai.

As I said it was, I knew I would play for the Pune team but the actual moment comes when you start walking with the team-sheet in your hand till that point of time its only practice and everything. It was a very emotional moment since I have started playing T20 cricket represented the Indian cricket team, Jharkhand team in few tournaments and CSK for eight years, so it was an emotional moment not to see myself in yellow, Dhoni said at the event.

But at the same time as professionals, we have to move ahead and also not to prove to anyone but to prove a point to myself that I am making sure whatever I gave in for CSK, I am not leaving any inch that I am not giving for the Pune team, he added.

The lump in the throat was eased for the captain when teammate and his dear friend Suresh Raina passed him a drink.

Along with 2 IPL titles, CSK and Dhoni also have 2 Champions League T20 (CLT20) Trophies (2010 and 2014) in their kitty as well. CSK will being their campaign on April 7 at the Wankhede Stadium where they will take on the defending champions and archrivals Mumbai Indians (MI). 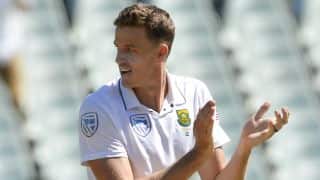 Hashim Amla, Temba Bavuma, others congratulate Morne Morkel ahead of the final Test at New Wanderers