Sunrisers Hyderabad (SRH)‘s bowling unit was ripped apart on Thursday by Gaylestorm in Match 16 of VIVO IPL 2018. Kings XI Punjab (KXIP) cruised to their third win in the tournament, courtesy Chris Gayle‘s 63-ball 104. Gayle became the first centurion of 2018 IPL. He also shattered several record en route to his century. It was his sixth IPL and 21st T20 century. In BPL, Gayle has scored 5 centuries, the recent one being 146 in the final of 2017-18 edition. He also hit 11 sixes, taking his overall T20 career six count to 834.

Most of Gayle’s T20 100s have come for his ex franchise Royal Challengers Bangalore (RCB). The second most 100s have come for his CPL team Jamaica Tallawahs. Although Karun Nair enjoyed the best seat in the world to watch Gayle shatter record after record, a happy KXIP skipper Ravichandran Ashwin could stop heaping praise on the ‘Universe Boss.’

“Chris batted beautifully and took it away from them. It is more about who we play and what works best. It is about doing well in the Powerplay. For example Mohit vs Dhawan was a clean match-up. It was extremely pleasing to see the crowd cheering us, we have never seen this in Mohali. Chris entertained them. One word won t be enough to describe his knock. His style is hard to replicate, when it comes off, it is hard to match it,” he told during the post-match presentation.

SRH’s bowling has been considered the best so far in 2018 IPL, until Gayle came and tore them apart. He was particularly brutal on the Afghanistan leggie Rashid Khan who ended with figures of 4-0-55-1. No wonder Ashwin was pleased with KXIP’s overall performance: “This was a complete performance. We could have conceded 10 runs lesser to work on the net run rate, but it did not happen but we are still happy. We thought giving them a reasonable score to chase is something we could handle at the back end.”

With this KXIP have taken the third spot in the points table after KKR and SRH. 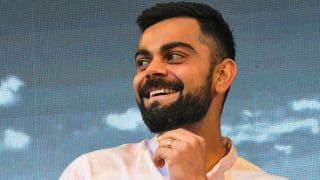 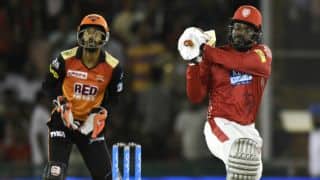