In their last outing, MI broke a sequence of three successive losses with a big win over Royal Challengers Bangalore.

Jaipur: Mumbai Indians coach Robin Singh says the one-wicket defeat to Chennai Super Kings (CSK) in the Indian Premier League (IPL) opener still rankles, considering they had the returning outfit on the mat. In their last outing, MI broke a sequence of three successive losses with a big win over Royal Challengers Bangalore.

Singh said he did not read much into those early reverses. “It is not a matter of concern because we were on the course of winning three matches consecutively. The one-wicket defeat against Chennai Super Kings still pinches because we had them on the mat.

“We feel we went for edges but they never flew, can’t say what went wrong. We got the act together and don’t want to look back but forward. We are looking at the remaining matches and keen to give our hundred percent,” said Singh.

When asked about wicketkeeper-batsman Ishan Kishan’s injury, Singh said that he has recovered. “He is a fine, energetic cricketer and recovered from the blow. He would be joining the practice session,” said the former India cricketer.

Talking about their good record against Rajasthan Royals, Mumbai Indians’ opponents tomorrow, Singh said that past records don’t matter. “Bygones are bygones and it can just give you confidence but we would do what we want to do. They are coming from back-to-back losses and the one against CSK was a humiliating one. We will make them know that they are coming from back-to-back losses.”

Regarding skipper Rohit Sharma batting in the middle order instead of opening the innings, Singh said that it gives balance to the side.

“Rohit Sharma is a tremendous opener but him batting in the middle gives us great balance. We do not need explosive batsman at every slot, we also need to give stability to the batting order.” 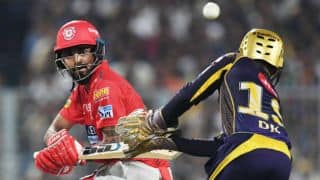