Kane Williamson amassed 735 runs in IPL 2018; ending way ahead of his competitors.

May 27, 2018, IPL Orange Cap Holder: Chennai Super Kings (CSK) beat Sunrisers Hyderabad (SRH) by 8 wickets in IPL 2018 final to lift the title for the third time. Chasing 179, Shane Watson after a slow start shifted gears immaculately to guide his side home courtesy his second ton of the season. Overall, this is CSK’s third championship, whereas SRH failed to replicate their 2016 edition’s success.

Talking about the Orange Cap, stand-in skipper Kane Williamson led from the front to end on top (735 runs). His dominance is evident from the fact that No. 2 ranked Rishabh Pant ended 50 runs behind.

Take a look at the top-five run getters of the just-concluded 11th edition:

The table was updated after the finale between CSK and SRH on Sunday. 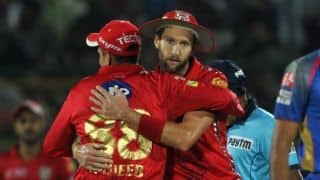