IPL 2018: Playoffs to shift from Pune to Lucknow?

IPL 2018: Playoffs to shift from Pune to Lucknow?

Earlier, in 2016, Apple Inc. CEO, Tim Cook had visited the venue in Lucknow to watch an IPL match.

The BCCI may shift VIVO IPL 2018 playoff matches from Pune to Lucknow. Pune is scheduled to host 2 matches on May 23 and May 25. Pune, the original hosts of the playoff games, are already hosting 7 Chennai Super Kings (CSK) home matches after IPL was forced out of Chennai due to the Cauvery river protests.

The Times of India quoted a BCCI official as saying, What works in Lucknow s favour is the huge crowd capacity (around 50,000) of the stadium in that city. However, we haven t finalised this yet. Rajkot and Kolkata are also in the running. We ll send an (IMG) team to Lucknow on Tuesday, and should be able to take a call later that day.

Lucknow was in the fray to hold a few matches this season. Earlier, in 2016, Apple Inc. CEO, Tim Cook had visited the venue to watch an IPL match.

Niranjan Shah, too, of Saurashtra Cricket Association (SCA) has raised his hands up for the playoffs. The BCCI secretary wants the games to be hosted in Rajkot, the ground which was the base for the now defunct Gujarat Lions (GL) in the last two seasons. 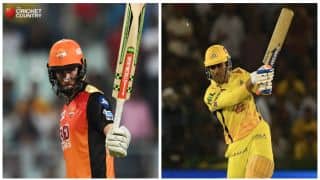