RR jump to the third spot while RCB remain intact at the sixth position in the 2018 IPL points table after Match 11.

Royal Challengers Bangalore (RCB)‘s losing streak in ‘Green jersey’ in IPL continued. They added fifth defeat to the tally with a new team – Rajasthan Royals (RR). Previously, they have lost the game against Mumbai Indians (MI), Chennai Super Kings (CSK), Kings XI Punjab (KXIP) and Kolkata Knight Riders (KKR). This came despite Virat Kohli‘s fireworks in the middle. In Match 11 of VIVO IPL 2018, Kohli and co. were unable to chase a massive total of 218 and slumped to 19-run defeat against RR.

Brendon McCullum’s poor form continued as he once again perished for single digit. Ben Stokes reversed cupped to remove the New Zealander, added to 2018 IPL’s best catches. Since, it was Kohli and Quinton de Kock’s show. Kohli started off the act with back-to-back boundaries of Dhawal Kulkarni. De Kock and Kohli were only dealing with fours, unlike Sanju Samson who dealt only with sixes till the penultimate over of RR innings.

RCB cruised to 64 runs of their Powerplay. In no time, Kohli eased to his fastest T20 fifty off 26 deliveries. His fifty was also the joint most T20 fifties along with Gautam Gambhir. There were a few more records added to his cap. He also completed 26,000 professional runs. Kohli in the process became the second batsman after Suresh Raina to score 4500-plus runs in IPL. Until his presence, RCB kept up with asking rate of 11.

The ball was handed to D’Arcy Short. He did have a bad time in office with the bat but made it up for a huge wicket of Quinton de Kock. His pull shot off a short delivery found Jaydev Unadkat at the deep. Short once again proved to be a surprise package for RR as he took a blinder at the ropes removing the danger man Kohli for 57. At one moment it looked like de Villiers would have to take RCB home once again. There were nervy moments to dismiss de Villiers: Buttler missed a stumping followed by a run-out chance. Yet, he continued his run-fest and became the first batsman to 500-plus runs against RR in IPL. But Shreyas Gopal applied the brakes and scalped second crucial wicket of de Villiers for 20, third wicket to fall off short ball.

De Villiers wicket triggered the collapse. Pawan Negi, who replaced out-of-form Sarfaraz Khan, also failed to take RCB to their second win at home. Then Mandeep and Washington Sundar gave it a shot towards the end, that came too late for RCB. However, Ben Laughlin’s yorkers and Stokes good length, ensured RR became the first team in 2018 IPL to win batting first.

Earlier, the new Orange Cap holder Samson brought in the Malyalam New Year (Vishu) with his powerpacked unbeaten knock of 45-ball 92, the highest individual score in 2018 IPL. His innings also set up the highest team score of 2018 IPL. Samson was ably supported with cameos from Ben Stokes (27), Jos Buttler (23) and Rahul Tripathi (14*).

RCB bowlers were torn apart, especially Umesh Yadav who ended his figures with 4-0-59-0, with his last spell seeing 27 runs coming off it. Amidst run-fest, Yuzvendra Chahal celebrated his personal milestone of becoming the leading wicket-taker of RCB, surpassing Vinay Kumar.

RR jump to the third spot while RCB remain intact at the sixth position in the 2018 IPL points table.

Player of the Match: Sanju Samson 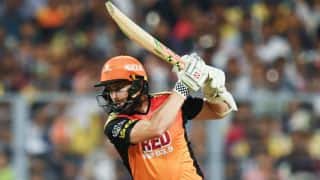