IPL 2018: RR's Krishnappa Gowtham 'on top of the world' after pulling off heist vs MI

IPL 2018: RR's Krishnappa Gowtham 'on top of the world' after pulling off heist vs MI

Jofra Archer was the catalyst in denying MI a 200-plus target.

Rajasthan Royals (RR) needed 38 off 14 to win against Mumbai Indians (MI) in VIVO IPL 2018, Match 21. Prior to that Sanju Samson (52) and Ben Stokes had put up a show at Sawai Mansingh Stadium with their 72-run stand for the third wicket. Jasprit Bumrah removed Samson and Jos Buttler in succession to pull the momentum back to MI’s side. Mustafizur Rahman then got Heinrich Klaasen and reduced RR to 125 for 6.

Krishnappa Gowtham then took the matter into his hands. The Karnataka spinner who was bought in 2018 IPL auctions for INR 6.2 crores snatched victory from jaws of defeat. He took 10 runs off Mustafizur followed by 8 runs of Bumrah. With 10 required of the final over, he slapped Hardik Pandya’s yorker to the boundary and then smashed the other to the mid-wicket to hand RR 3-wicket win.

His quickfire 11-ball 33 witnessed 4 fours and 2 sixes. Gowtham was ‘on top of the world’ after securing a thrilling win: “On top of the world, had a decent first-class season with the bat. My captain said ‘believe’ and that is what I did. No nerves on turning the single down. Just needed six off three balls, one good hit, that’s all I was thinking.”

Earlier, it was Jofra Archer who denied MI another 200-plus total. Archer took 3 wickets in his final spell to end up with figures of 4-0-22-3. He was duly awarded Man of the Match. 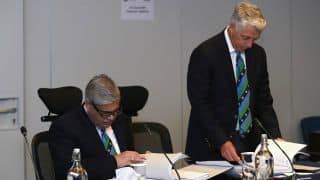