After a five-year hiatus due to spot-fixing scandal and RCA suspension, Rajasthan Royals (RR) return back to Jaipur for their first home game in IPL 2018. Losing their tournament-opener rather convincingly to Sunrisers Hyderabad (SRH) on Monday, Rajasthan are well aware of the significance of their home game versus Delhi Daredevils on Wednesday. Sensing the opportunity to maximise home support, skipper Ajinkya Rahane shared a special video through Royals’ official Twitter handle:

#RoyalCaptain @ajinkyarahane88 is excited to be back at SMS Stadium!

Royals’ skipper urged fans to turn up in large numbers when they take on Delhi on Wednesday evening. He spoke about the “positive vibe” that he gets whenever in Sawai Mansingh Stadium, Jaipur. Rahane is confident that the fans’ backing would turn up to be an influential factor for the franchise.

Rajasthan have all the reasons to start as favourites at Jaipur. They have a staggering win per cent, of 73, at the picturesque venue. In addition, they have lost only one game versus Delhi in four clashes here.

On the other hand, Rahane enjoys a good run in the venue and would be eager to start well with the willow. He fell for a run-a-ball in Rajasthan’s tournament-opener, and will be expected to lead from the front this time around. 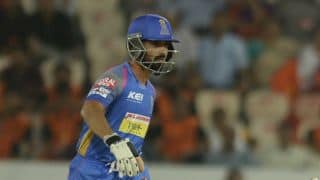