Rajasthan Royals(RR) became the first team to win batting first in VIVO IPL 2018 as they beat Delhi Daredevils (DD). With rain interrupting the proceedings, RR could only bat for 17.5 overs and the game was eventually reduced to six overs with DD needing 71 to win. RR bowlers bowled at smart lengths, ensuring their team to a 10-run win (DLS method). This was Delhi’s second consecutive defeat in the tournament and Rajasthan’s seventh consecutive win against Delhi.

RR scored 51 runs in the Powerplay, losing the important wickets of D’Arcy Short and Ben Stokes. Ajinkya Rahane was the top-scorer with 45 runs. Jos Buttler (29) and Sanju Samson (37) scored some quick runs in the middle but failed to capitalise on it. In the second innings, Glenn Maxwell opened the batting with Colin Munro in pursuit of scoring quick runs. DD lost Colin Munro in the first ball of their innings and just continued to play the catching up game.

Shreyas Gopal did not bat or ball. He didn’t even take a catch.

Colin Munro was out on a golden duck. Shreyas Iyer came to bat but did not face a single ball. Gautam Gambhir did not come to bat nor did he take any catch.

Delhi were seen as one of the favourites at the start of the IPL with Gambhir returning at helm. However, with the big players not contributing much they have failed to deliver. We might see young chaps like Prithvi Shaw, Manjot Kalra and Sandeep Lamichhane making their debut soon. They will next take on Mumbai Indian on April 14 at Wankhede Stadium. 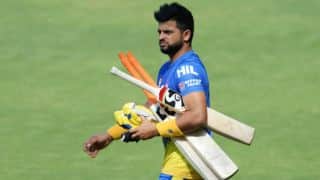 IPL 2018: Suresh Raina, Harbhajan Singh among others express their feelings regarding the shift of home venue for CSK