New Delhi: Royal Challengers Bangalore (RCB) all-rounder Chris Woakes believes that they will use the four consecutive home games in Bengaluru as “a springboard” to turn things around after managing only one win in four games in the Indian Premier League (IPL). In their campaign opener against Kolkata Knight Riders (KKR), Bangalore failed to defend a competitive 177 runs but salvaged a win in their second game by chasing a moderate 156 runs against Kings XI Punjab (KXIP) at home. They later went on to be at the receiving end in the games against Rajasthan Royals (RR) and Mumbai Indians (MI), losing by 19 and 46 runs respectively.

RCB’s run of four consecutive games begins on Saturday against Delhi Daredevils before meeting Chennai Super Kings (April 25), Kolkata Knight Riders (April 29) and Mumbai Indians (May 1). Talking to IANS, Englishman Woakes reckoned that they have not been doing well in the whole 40 overs of a match. “We have not put a full performance yet in the sense that we have not batted well and bowled well in the same game. One or two overs can change things in T20 cricket. We have to do well in all 40 overs. We have leaked few (more) runs towards the back-end of the innings in the last games,” he said on Friday.

“Guys are upbeat, confident going forward. We have four home games on the bounce — we can use that as a springboard to get our campaign back on track. If we win two or three games out of these four games, we can get to a strong position,” the 29-year-old seam bowling all-rounder added. “In this format, momentum can shift very quickly. And the guys are still upbeat, willing to go to practice and train hard.”

Talking about Saturday’s opponent Delhi, who also have one win in four games, Woakes said: “We know that Delhi are in similar position like us. But they are a very strong team. On the day they can be difficult to beat. We will try and utilise our strengths to the best.”

Woakes also dismissed the fact that RCB rely heavily on captain Virat Kohli and AB de Villiers. In the past editions, the side’s batting only clicked when these two or one of them, got it going. This term apart from Kohli and de Villiers, RCB need good batting from Mandeep Singh, Sarfraz Khan, Quinton de Kock and also Woakes.

“We have got a good team from top to bottom. We have a batting line-up that bats very deep. We do have world-class batsmen at the top of the order but we also have world-class middle-order batters as well,” Woakes said.

“I am sure everyone will put their hands up and perform for the side,” Woakes, who played for KKR in the previous IPL edition, concluded. 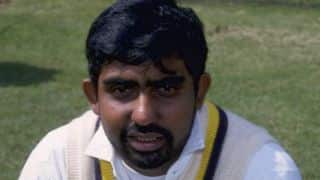