Mumbai Indians, chasing 119, were bowled out for 87 against Sunrisers Hyderabad.

Mumbai Indians (MI) entered VIVO IPL 2018 as the defending champions. They are the most successful franchise in the tournament history, having bagged 3 IPL titles and 2 CLT20s. They were chasing 119 against Sunrisers Hyderabad (SRH) in the Match 23 of the tournament. They were skittled out for 87. MI sets high standards and after yet another shambolic show, skipper Rohit Sharma lambasted the batsmen.

We have got ourselves to blame. We should chase down 118 on any wicket, we didn t show character, the Sunrisers did. Very happy with the way we bowled, they did a brilliant job, but the batsmen let us down once again. There are so many points that I can talk about, but don t want to pinpoint faults now,” said Rohit, whose team has now lost 5 matches this season.

Blaming the batsmen for their shot selection and not showing enough intent, Rohit added, “We needed to show some intent, which we failed today. We knew it was a tough chase, shot making wasn t easy, we wanted to have intent at the start. They bowled at the right areas, kept us guessing and we couldn t recover. Few of us played some bad shots, including myself, he said.

Mumbai are at the seventh spot in the points table having played 6 matches. Historically, 16 points has been a safe zone in the IPL to qualify for playoffs. To get there, Mumbai will have to win 7 of their last 8 matches. They will face the rampant Chennai Super Kings (CSK) at Pune on Saturday. They lost a thriller against them in the tournament opener at Wankhede Stadium. 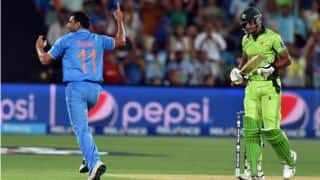