Earlier, Rohit and Lewis added 108 runs for the third wicket off just 66 balls, doing the repair job and also setting the platform for Mumbai Indians.

A sublime batting show from Rohit Sharma in Match 14 of VIVO IPL 2018 muscled Mumbai Indians (MI) to 213 for 6 in their 20 overs against Royal Challengers Bangalore (RCB) at Wankhede Stadium, Mumbai. Rohit, batting on 80 before the start of the final over, fell 6 short of what could have been his 2nd IPL hundred. He was caught at long-off in the penultimate ball of the innings. Rohit’s 94 was laced with 10 fours and 5 sixes. Earlier, Rohit and Lewis added 108 runs for the third wicket off just 66 balls, doing the repair job and also setting the platform for the hosts.

Electing to bowl first, RCB were off to a dream start. Umesh Yadav wreaked havoc in the Mumbai camp, picking up 2 wickets off the first 2 balls of the match. He went through Suryakumar Yadav’s defence first up and followed it up with a fast, full delivery to beat Ishan Kishan’s drive and clean him up. Rohit, at No. 4, faced the third ball of the match. From thereon, Lewis and Rohit took the attack to the opposition.

The real carnage began in the fourth over, the first from Washington Sundar, that went for 19. Lewis took the front seat and belted his first fifty of IPL. The duo added 108 runs off just 66 balls. Lewis, set for a century, fell to Corey Anderson in the 12th over.

Rohit stepped up the pedal once Lewis fell. He reached his 33rd IPL fifty in the 15th over of the innings and took it on.

Krunal Pandya was run out in the 16th over and Kieron Pollard added little to the score. There was plenty of drama in store in the 19th over after Pollard fell to Chris Woakes. Hardik Pandya received a peach first ball: it curled away from Hardik, seemingly kissing his outside edge to Quinton de Kock’s gloves. The umpire ruled out but Hardik was quick to review it. Replays did suggest a spike but the third umpire ruled it against the fielding team, much to Virat Kohli and Woakes’ ire.

To rub salt to the wounds, Hardik slammed back-to-back sixes off the next 2 balls. RCB leaked 21 runs off the final over. Anderson, who had claimed took Lewis earlier, was entrusted with the job despite Yuzvendra Chahal and Sundar having overs left. In fact, Woakes, too, bowled an over less due to a miscalculation. 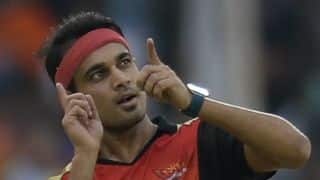 IPL 2018: Siddarth Kaul reveals he has been improving on the knuckle ball