IPL 2018: Rohit Sharma should open; Hardik Pandya has to bat up the order for MI, says Sanjay Manjrekar

IPL 2018: Rohit Sharma should open; Hardik Pandya has to bat up the order for MI, says Sanjay Manjrekar

Manjrekar said he could not understand their batting order and insisted that Hardik Pandya should bat higher up.

Mumbai: Gautam Gambhir had to step down from the helm after the failure of Delhi Daredevils (DD) batting unit in VIVO IPL 2018, but his leadership was not an issue, feels former India batsman Sanjay Manjrekar. DDin the seventh spot after their win vs Kolkata Knight Riders (KKR).

“I don’t think Gambhir’s leadership was a problem, it was just about the batsmen not getting runs, notable failure like (Glenn) Maxwell hurting them. Gambhir, the batsman, thereby had to get runs because the others were failing around him. Gambhir was picked more for his captaincy than his batting, but because the batting group was not clicking, Gambhir the batsman came under scrutiny,” Manjrekar told PTI.

“I don’t think the leadership was an issue but (they needed to) do something to reboot. You expected something like this after their last result and being at the bottom of the table. This was the time to change something,” added the former cricketer who is ESPNcricinfo‘s Match Day and Run Order expert. Manjrekar cautioned there cannot be a dramatic change in DD’s fortunes under new captain Shreyas Iyer, unless their batsmen deliver and their bowling unit does not remain too dependent on New Zealand pacer Trent Boult.

“Shreyas Iyer as captain can change nothing if batting continues to be a problem and their bowling just cannot be dependent on Trent Boult,” he said. As to Mumbai Indians (MI), who too have had a dismal run winning just one out of their first six games, Manjrekar said he could not understand their batting order and insisted that Hardik Pandya should bat higher up.

“Hardik Pandya has to bat up the order. There is too much obsession of having left and right hand combination, thereby Hardik is batting at number seven in the last 3-4 games. He could be your number 4-5, so there could be more onus on Hardik as a batsman,” Manjrekar said.

“They have got Evin Lewis who is opening and they have tried a few other options, but I have not understood their batting order. There is no harm at all in having Rohit Sharma (to open) – I thought he would open in the last match (against SRH) as it makes a lot of sense. But he is somebody who has delivered at various positions for MI, it is not that he only succeeds at the top, so yes that is something they could try.”

The former batsman also feels that wrist-spinners are successful in the T20 league because they are able to deceive the big-hitters with their variations and deceptions even though they don’t turn it big.”These wrist-spinners have leg-spin, top spin, quicker delivery and googly which are very similar to each other. They just sort of have different angles after the ball pitches.

“You can’t say that it turned sharply, but the deception is a problem,” he said, adding that a lot of batsmen who are desperate to hit the ball out of the ground are not able to pick up the deception.”A little change of angle of line helps them. Their deception with variations is creating the problems (for batsmen),” Manjrekar explained.

Manjrekar was most impressed with the bowling attack of Sunrisers Hyderabad (SRH).”Delhi certainly does not have a great bowling side. Kings XI Punjab (KXIP) have got two excellent spinners in (Ravichandran) Ashwin and Mujeeb (Ur Rahman) and one seamer in (Andrew) Tye. SRH have Rashid Khan who is making match-changing contributions. There are quite a few good bowling attacks but on actual performances you have got to say Sunrisers is the pick of all,” he concluded. 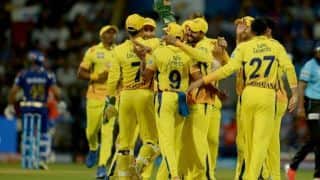