Rohit Sharma surpassed Suresh Raina’s tally of 174 IPL sixes en route 94 in Match 14 of VIVO IPL 2018, against Royal Challengers Bangalore (RCB) at Wankhede Stadium, Mumbai. Rohit walked out to bat in the third ball of the innings after Mumbai Indians (MI) lost back-to-back wickets off the first 2 balls of their innings with Umesh Yadav cleaning up Suryakumar Yadav and Ishan Kishan. Rohit then 108 in 66 balls with Evin Lewis, and took charge once Lewis fell. Rohit belted 5 sixes in his innings, his first off Washington Sundar in the eighth over, over mid-wicket. With that shot, he went past Raina’s tally.

Rohit made his IPL debut for the now-defunct Deccan Chargers in 2008. He won an IPL title with Chargers and later led MI to 3 titles. Rohit is also the third-highest run-getter in IPL history, after Virat Kohli and Raina. 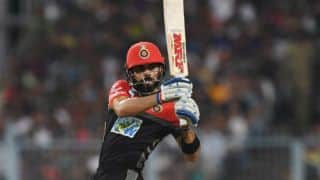