Royal Challengers Bangalore (RCB) led by skipper Virat Kohli will don green jerseys when they take on Rajasthan Royals in an Indian Premier League (IPL) home match on April 15. During RCB’s tie-up announcement with Nuvoco Vistas Corp Ltd, who are now the principal partners of the team and will occupy the solus position in the back of jersey with their brand Duraguard Cement, the organisers revealed the date of their ‘Go Green’ initiative.

As part of the programme that takes place every season, captain Kohli gives a small plant to his rival counterpart and the names of the players on the jerseys are replaced by their Twitter handles.

“We support the green initiative and this year the match will be on April 15 when RCB take on Rajasthan Royals,” Madhumita Basu, chief of sales marketing and innovation, told reporters during RCB’s jersey unveiling here. Incidentally, Duraguard Cement is also available in Green bags and we hail the RCB sustainability approach of playing one game each season with a green jersey made of recycled plastic,” she added.

RCB begin their campaign against Kolkata Knight Riders (KKR) at the Eden Gardens here on April 8. 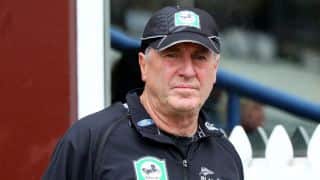