RCB and RR have a win each to their name. One would can make it two into two in the 2018 IPL.

It is that time of the year when we use the clich ‘Battle Royal’ as Royal Challengers Bangalore (RCB) will hosts Rajasthan Royals (RR) in Match 11 of VIVO IPL 2018 at M. Chinnaswamy Stadium on Sunday. Both the sides have pocketed a win at their home venues and are placed at fifth and seventh position respectively in the points table. RCB rode on AB de Villiers fifty to get off the mark in 2018 IPL while RR beat Delhi Daredevils (DD) by 10 runs in a rain-hit match at Sawai Mansingh Stadium.

For RCB, their pacers came good after a torrid start against Kolkata Knight Riders (KKR) in their first IPL game. Umesh Yadav, Kulwant Khejroliya, Chris Woakes, Washington Sundar kept Kings XI Punjab (KXIP) under check throughout the Punjab innings. However, in response, a better show was expected from batsmen.

Brendon McCullum did not fire. Virat Kohli started off strongly but was caught by Mujeeb Zadran s googly. Ultimately, it came down to the South African batsmen to hand RCB their first win. Kohli, who has 52 runs under his belt, will be itching to complete the unfinished task at his den. McCullum, too, would want to get back to thick of things after a golden duck.

RCB would not mind bringing hard hitting Manan Vohra into action for a shaky Sarafraz Khan. Kohli known for shuffling his XI could get Colin de Grandhomme into action given that he can hit hard and bowl as well in place of Woakes.

In terms of RR, there have been few hits and flops in the side. A lot was expected from the BBL leading run-scorer D Arcy Short in 2018 IPL. All he has managed were run outs. If the runs have come up on board for RR it had flowed from the willow of Ajinkya Rahane, Sanju Samson, Jos Buttler and Rahul Tripathi. RR need their batsmen to up the ante.

RR bowling has been dependent on Jaydev Unadkat, Ben Laughlin and Dhawal Kulkarni. The spinners, however, have to step up to support the pacers. This year s most expensive player (for the second time), Ben Stokes, who has managed just 21 runs from two games, also would aim to rectify his errors and pull up his socks ahead of the big clash.

RR would not mind giving an opportunity to Heinrich Klaasen. Klaasen took Yuzvendra Chahal apart in South Africa earlier this year. Rahane would love to give Chahal a Klaasen taste again.

These are still early days. Rahane s challenge will be to get Royals together as a team. Yet, the likes of Unadkat, Laughlin, Stokes would be itching to live up to the huge price tag and would hope to give some nightmares to Kohli, de Villiers, McCullum and other big names. The head-to-head record is pretty close between the sides reading 8:7 in favour of the hosts. Out of the games played between the sides, two were abandoned due to rains.

Trivia: Rahane has enjoyed a great run at M Chinnaswamy. In last five IPL innings here, Rahane has scored 245 runs at an average of 61.3 and a strike rate of 145.8. His only T20 century also came against RCB in 2012. Rahane would look to add up to the tally. 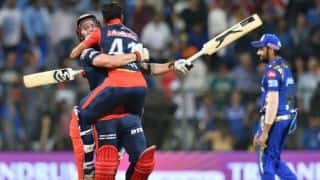