Sandeep Lamichhane will be heading to India next week for IPL.

Kathmandu: Leg spinner, Sandeep Lamichhane, from Nepal who was selected 2018 IPL was handed the Delhi Daredevils (DD) jersey on Thursday. Nepal Sports Council Member Secretary Keshav Bista handed Jersey number ‘1’ to Lamichhane. “I cannot take the number 25 from my seniors, as the birth date of my deceased Nephew falls on January i.e. 1, so I took the number for the jersey and we always want to be number one for which I took the number,” said Sandeep in regard to his choice about the number on his jersey.

Lamichhane will be the first Nepal cricketer to represent his team in IPL. The youngster revealed his plans for upcoming IPL and took pride in being the first Nepali cricketer to play IPL: “Becoming the first cricketer to represent Nepal in IPL is an achievement for Nepali cricket. I hope that in coming years there are many players from Nepal who will play IPL. It will be a great exposure. I would definitely want to be a match-winner for the side. Also, would love to gain as much as experience from every player as possible. I want to take away as many positives from the league as possible.”

DD will not just have Lamichhane but also their top leg spinner Amit Mishra in their bowling armory: “It is always great to get connected with any leg spinner in your team. Amit Mishra is one of the top bowlers in IPL. I would love to learn more about variations, his experience,” Lamichhane added.

17-year-old Nepali cricketer Lmaichhane was auctioned for INR 20 lakhs by DD during the auction held in January this year. “Somebody from Nepal would have taken him before us had we not stepped in. Sandeep Lamichhane is someone who is talented who brings something unique to the team,” said CEO of Delhi Daredevils team who clarified media about Sandeep’s selection.

Sandeep recently came back to Nepal after playing World Cup qualifiers from Zimbabwe and will be heading to India next week for IPL.

This season’s IPL is set to start from April 7 to the May 27. In this season, a total of eight teams will be competing in the tournament. 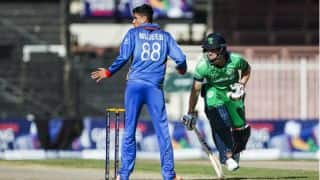