Did you know, Samson was brought by Kolkata Knight Riders (KKR) in 2012 edition, but never played a game.

Sanju Samson surpassed 1,000 Indian Premier League (IPL) runs playing for Rajasthan Royals (RR). Sanju achieved this feat during RR s clash with Sunrisers Hyderabad (SRH) at Jaipur in Match 28 of IPL 2018. He is also the fifth player for RR to do so. Samson made his RR debut in 2013, scoring 206 runs that year, but his breakthrough season came in 2014. Samson scored 339 runs in 13 games, impressing the great Rahul Dravid.

He soon became a household name and soon became an India prospect. Samson played for India in 2015. He then moved to Delhi Daredevils (DD), spending two years with them. During the IPL player auction 2018, RR purchased Samson for INR 8 crores. He has instilled the franchises faith in him, scoring 239 runs from 6 games this season.

Overall, Samson has 1,665 runs in IPL with one hundred and nine fifties to his name. Did you know, Samson was brought by Kolkata Knight Riders (KKR) in 2012 edition, but never played a game. 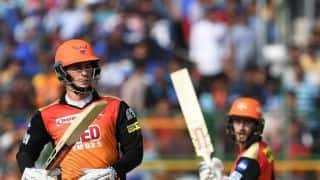