Kuldeep was one of the architects in KKR's victory over Rajasthan Royals after being under the pump initially in Eliminator.

Kolkata: Hot on the heels of making the Indian Premier League (IPL) Qualifier 2 after posting a 25-run win over Rajasthan Royals in the Eliminator, Kolkata Knight Riders’ (KKR) chinaman bowler Kuldeep Yadav said their next opponents Sunrisers Hyderabad (SRH) will not find it easy to adjust to the Eden Gardens strip. Sunrisers, who lost to Chennai Super Kings in Qualifier 1 at Mumbai will get a second chance to reach the summit clash against KKR on Friday.

But Kuldeep felt, the men in purple’s ‘home advantage’ should hold them in good stead as the Wankhede Stadium pitch in Mumbai is different from the one at Eden. “For us, it’s very easy to play here. It’s home ground for us. We are very used to the conditions. Obviously, it will be difficult for them to come from Mumbai and play here. The wicket is totally different here from Mumbai where it has true bounce. Here it helps the spinners. It will be a good contest,” Kuldeep told reporters at the post-match press conference.

KKR beat Royals by 25 runs to fix their date with Sunrisers who beat them by five wickets at the Eden in the league stage. Sunrisers topped the league table but have lost their last four games.

Kuldeep said KKR won’t think about Sunrisers’ poor form coming into the tie. “Yes, we won four out of four but we are not thinking about whether Sunrisers lost four in a row. We are looking for our next match. Winning is most important,” the celebrated India spinner opined.

Kuldeep was one of the architects in KKR’s victory over Royals after being under the pump initially. Chasing 170, Royals batsmen Rahul Tripathi and Ajinkya Rahane got off to a good start and were 87/1 at the halfway stage with Rahane and Sanju Samson well set.

Post the 14th over, Kuldeep triggered the comeback by removing Rahane followed by Piyush Chawla getting rid of Samson.

Asked if Rahane is slowly becoming a batsman he can get out easily, Kuldeep said, “I don’t know seriously. It’s very important to get wickets and Ajju bhai was batting very well. I did not bowl anything different. I just bowled a wrong one in a good area.”

Kuldeep was also effusive in his praise for West Indian all-rounder Andre Russell who not only helped KKR reach 169/7 with a whirlwind 25-ball 49 after early hiccups but bowled tight overs towards the end of Royals’ chase to choke them to 144/4.

“Russell played an extraordinary inning of 49 not out from 25 balls. We were thinking of 140-150 but ended up with a good score of 169. He also bowled well at the death and deserved the man of the match,” Kuldeep said.

On mystery spinner Sunil Narine going wicketless, Kuldeep said when the team’s best bowler is having an off day, it’s his and Piyush Chawla’s job to make up for it.

“Sometimes it happens when your best bowler goes through bad patches. Me and PC (Piyush Chawla) had to stand up for him and we bowled very well,” he said.

Kuldeep further added that he always looks to stick to basics in T20 cricket as too much experimenting can lead to leaking runs.

“I’m focussing on basics and backing my strength.. not trying too much. T20 is a format where if you try much you can go for runs. The way they started, I just backed my strengths and stuck to the basics.” 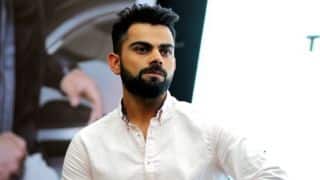 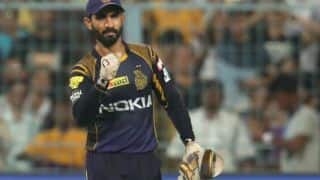